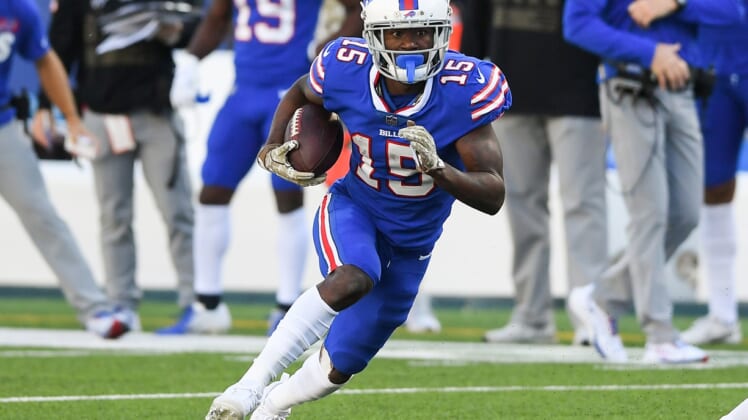 The Las Vegas Raiders added an explosive weapon to their passing attack on Wednesday in striking a one-year deal with John Brown.

After spending the past couple of seasons with the Buffalo Bills, Brown was released earlier this offseason, but it didn’t take long for Las Vegas to pounce on him.

NFL SiriusXM Radio’s Adam Caplan reported the news of John Brown signing with the Raiders, and provided the contract details:

Caplan also noted that Brown plays the “X” receiver position, which is where ex-Raider Tyrell Williams lined up. Unfortunately, Williams missed the entire 2020 campaign due to injury and was released. He didn’t live up to the hype as a splashy free-agent acquisition.

The one-year prove-it deal Brown signed brings him to his fourth different team. He was a third-round pick of the Arizona Cardinals, and between his initial stint in the desert and his two years in Buffalo, Brown spent the 2018 campaign with the Baltimore Ravens.

Last season, Stefon Diggs led the NFL in receiving for the Bills, and Cole Beasley proved effective as a slot weapon, while rookie Gabriel Davis came on fairly strong. That spelled the end for Brown in Buffalo after he appeared in only nine regular-season games.

But the year before saw Brown record a 1,000-yard season and six touchdowns. Provided he stays healthy, Brown is a legitimate deep threat who came out of college running a 4.34-second 40-yard dash.

Raiders coach Jon Gruden has to be excited about the prospect of adding Brown to his offense. Quarterback Derek Carr now has two speedsters in Brown and 2020 first-round pick Henry Ruggs III to air it out to, along with stud tight end Darren Waller.

The bigger problem in Las Vegas right now is protecting Carr long enough to allow him to attack downfield. An overhauled offensive line leaves the Raiders in serious jeopardy despite their intriguing cast of pass-catchers. They’re also in the AFC West with Kansas City and the Los Angeles Chargers, so it’ll take some serious point-scoring to keep up.

While Brown is among the best one-year fliers Las Vegas could’ve hoped for to make up for wideout Nelson Agholor’s departure to New England, the Raiders must find stability in the offensive trenches and overhaul their defense to have any hope at competing for the playoffs in 2021.