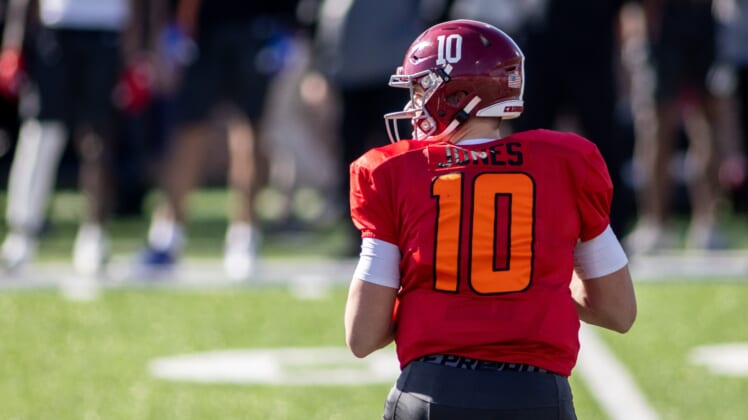 The New England Patriots have been busy reshaping their offense this spring. With the 2021 NFL Draft approaching, Bill Belichick and Co. could be looking for the quarterback to lead this attack for years to come.

After seeing Tom Brady depart last offseason, New England felt confident that Jarrett Stidham could be its new face of the franchise. But the club later signed Cam Newton and thinks eventually got so bad with Stidham that the Patriots were afraid to start him.

Still needing a quarterback a year later, the Patriots pursued a Matthew Stafford trade and explored other options. Nothing ever came to fruition, leaving Newton as the projected starter for 2021. While the former NFL MVP is the favorite to start, he might face some competition based on the latest NFL Draft rumors.

The Athletic’s Ben Standig spoke to multiple high-ranking executives about what could unfold in the 2021 NFL Draft. Among the intel shared, one prominent team executive believes the Patriots could trade up from the No. 15 pick to land a long-term quarterback.

“I could see him trading up for that. In (Belichick’s) mind, he’s probably going, ‘I’m not going to be picking 15 again, so let me go trade up (while here).’”

It’s far from the first time the Patriots have been connected to this year’s quarterback class and a potential draft-day trade. They looked into a Jimmy Garoppolo trade, but the San Francisco 49ers’ asking price was too high. With him off the board, a trade-up became a renewed focus.

New England could take a risk by staying put and hoping one of the top-five quarterbacks falls. But given how high this year’s top signal-callers are expected to go, a trade might be required to land one.

Trevor Lawrence and Zach Wilson will be the first two players drafted on April 29, immediately removing them from the quarterback board. Fortunately, Justin Fields, Trey Lance and Mac Jones will all still be available and are great options.

Fields, widely viewed as the third- or second-best quarterback in the draft class, just held his second Pro Day. He is the most accurate passer in the 2021 NFL Draft with outstanding arm strength, poise in the pocket and a 4.43 40-yard as a 6-foot-3 passer.

While some have knocked him for being a product of Ohio State’s offense and struggling to progress through multiple reads, the Buckeyes’ scheme has more pro-style elements than Clemson’s screen-heavy attack. Fields also bested Lawrence in the College Football Playoff Semifinal and some believe he might have even greater upside.

Fields is the odds-on favorite to be drafted No. 3 overall by San Francisco, but there’s growing buzz to suggest Kyle Shanahan wants Jones. If Fields slides, he could be the perfect quarterback to sit early in his rookie season and then unleash on the NFL when he is ready. With the right coaching, he could become a top-five quarterback in the NFL at his peak.

Jones is another option and there are undeniable ties being drawn to New England. While he didn’t have the greatest Pro Day showing, the Patriots remain high on him. If Jones slips past San Francisco, he could experience a draft-day slide. He’s likely too similar to Jared Goff for the Detroit Lions to draft him and the Carolina Panthers just pulled off the Sam Darnold trade.

Assuming Jones is Belichick’s guy and he isn’t picked by the 49ers, the No. 10 pick could be the right spot. The Dallas Cowboys are open to trading down and New England is loaded with Day 2 and 3 selections. The Patriots could keep their 2022 first-round pick and still get a long-term solution at quarterback.

Finally, Lance is an intriguing option for the Patriots. He only played in one game for North Dakota State this past season due to the COVID-19 pandemic and there are legitimate questions about the transition from FCS to the NFL. But this is also a 6-foot-4 quarterback with tremendous speed for his size and can launch the ball 70-plus yards with ease.

Lance needs to spend a year with NFL coaches, but he will see time in his rookie season. He could learn a lot from Newton and Lance’s dual-threat abilities would take the Patriots’ offense to another level. While this might require trading up to No. 7 overall, costing New England its 2022 first-round pick, the upside might justify the cost.