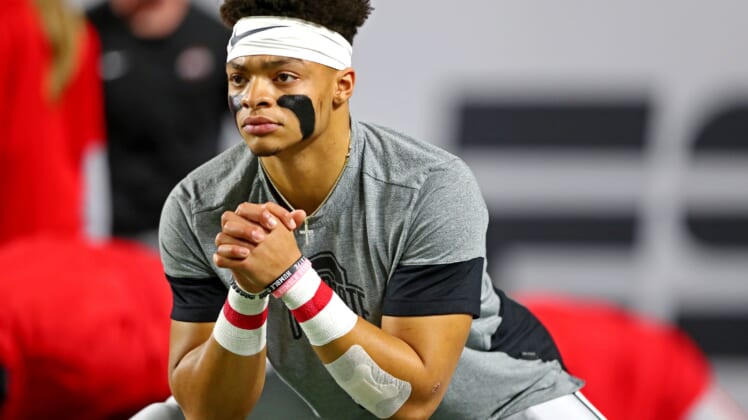 With the 2021 NFL Draft about five weeks away, rumors continue to come up regarding the top quarterbacks of the class. That includes Justin Fields from Ohio State.

The athletic signal caller was seeing his stock drop somewhat prior to showing out during Ohio State’s Pro Day last week. That included him running a 4.41 40-yard dash. It now looks like Fields will be the third quarterback off the board behind Trevor Lawrence and Zach Wilson.

We’re also hearing some more about a potential landing spot for the raw, but talented quarterback. According to NFL Media’s Daniel Jeremiah, the New England Patriots could be looking to move up for Justin Fields.

“I keep an eye on somebody like Trey Lance or Justin Fields. Those are the two that would make sense for them to target,” Jeremiah noted. “Hear a lot of rumors out there that they are really high on Justin Fields out of Ohio State. So, they’d have to (trade up) quite a ways to get Justin Fields.”

Having just recently re-signed Cam Newton to a one-year contract, New England is still looking for a quarterback of the future. The team’s lack of interest in both Matthew Stafford and Carson Wentz before they were traded earlier this offseason suggests that the 2021 NFL Draft might be the direction Bill Belichick and Co. are leaning to find that next quarterback.

Picking 15th overall in the first round, New England would likely have to move up into the top five to land Justin Fields. In fact, it could be forced into a trade with the division-rival Miami Dolphins at three. That would come at a high cost.

Read More: Justin Fields: 5 teams who are a perfect fit for Ohio State in 2021 NFL Draft

How might a Justin Fields trade to the New England Patriots look?

Right now, it seems like the New York Jets are set to select BYU quarterback Zach Wilson with the second pick. Assuming Trevor Lawrence goes No. 1 to the Jacksonville Jaguars, moving up to three with the Dolphins could work.

It was back in 2016 that the then-St. Louis Rams moved up to No. 1 overall to selection Jared Goff. That very same draft saw the Philadelphia Eagles move up to the second selection for Carson Wentz.

As for the Eagles trade, they moved the eighth overall pick in 2016, a third and fourth rounder in 2016, a first-round pick in 2017 and a second-round selection in 2018 to the Cleveland Browns for the second selection. Obviously, the Patriots moving up from 15 to three for Justin Fields would cost more.

However, there’s a scenario in play that suggests Miami stands pat at three and selects a player at a different position. It has no need at quarterback after picking Tua Tagovailoa No. 5 overall last April. It’s in this that a trade up to No. 4 with the Atlanta Falcons could potentially net the Patriots Justin Fields.

All of this comes after a busy first few days of free agency for the Patriots. They have reworked their entire skill-position group for Cam Newton, adding tight ends Hunter Henry and Jonnu Smith to the mix while picking up receivers Nelson Agholor and Kendrick Bourne as well.

Finally getting that replacement for Tom Brady could now be in the cards next month. If so, Justin Fields seems to make a ton of sense.