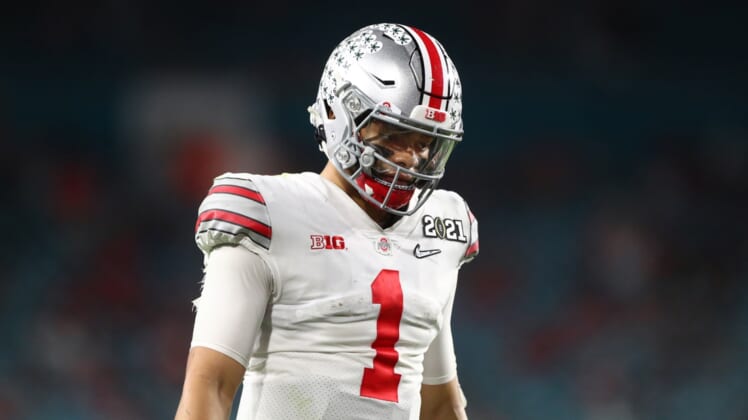 Ohio State quarterback Justin Fields jumped ahead of Alabama’s Mac Jones and is the heavy favorite to be the third overall pick in the 2021 NFL Draft.

The San Francisco 49ers hold the No. 3 pick after a trade with the Miami Dolphins and had previously been connected to Jones, the quarterback who led the Alabama Crimson Tide to the 2020 national championship.

But DraftKings Sportsbook pulled a 180 on Thursday and Fields is now the favorite to be picked third at -121.

Fields was +175 to go third overall with Jones favored at -150 on Wednesday before he held his second pro day workout. The 49ers were in attendance and a photo of Fields laughing with San Francisco head coach Kyle Shanahan was widely circulation on social media.

Jones is the second favorite for the third pick. His odds are now +100, ahead of North Dakota State quarterback Trey Lance (+300).

FanDuel made a similar move Thursday, slotting Fields at -125 and in the favorite’s role with Jones +105 and Lance +650.