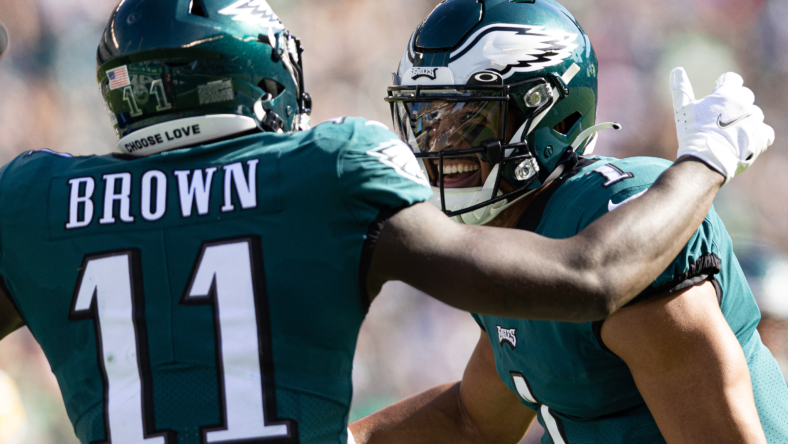 The undefeated Philadelphia Eagles find themselves as two-touchdown favorites over the homestanding Houston Texans heading into Thursday night’s outing to open Week 9 of the NFL schedule.

Amazon Prime can’t be too happy about what promises to be a lopsided affair between two teams on opposite ends of the spectrum after some stinkers earlier in the season.

The question is whether a one-win Texans team can even make this close. Heck, could they pull off the shocker to end all shockers? Below, we check in on five players to watch for this “Thursday Night Football” contest.

Robert Quinn looking to make an impact for the Philadelphia Eagles

As was anticipated, Quinn saw very little action in his first game with Philadelphia after being acquired from the Chicago Bears. The three-time Pro Bowler played just 20 snaps on defense, recording a quarterback hit and zero sacks in the process in last week’s blowout win over the Steelers.

Philadelphia picked up Quinn for one reason. Get to the quarterback. Whether he’s lined up on the left side or right side, Quinn will face a difficult task against a Texans offensive line that has yielded a mere 16 sacks of Davis Mills in seven games. Despite their 7-0 record and standing as the fourth-best scoring defense in the NFL, the Eagles are looking for an added pass rush. Slated to play more in this one, Quinn needs to be up to the task.

Houston Texans must now be all about evaluating Davis Mills

It’s not going to be about the stats or final score in this one. Mills is already behind the proverbial eight-ball without Nico Collins and with fellow wide receiver Brandin Cooks questionable due to his issues with the organization. Analyzing whether he’s the future of the quarterback position in Houston is about more than one game.

Like the rest of his Texans offense, Mills has struggled big time recently. He threw for just 17 yards in the first half of last week’s loss to the Tennessee Titans. The second-year quarterback also knows it’s about doing better to put his unit in better third-down situations.

“We’ve kind of made some adjustments if we’re going to see those, how we’re going to adjust to it and what we’re going to do to combat that,” Mills said ahed of Thursday’s game. “Other than that, it’s any other week. We’re focused on what we need to do to go out there and play faster on Thursday.”

As you can see, Mills has not looked like a starter-caliber quarterback thus far this season. Now that Houston has an additional first-round pick in the 2023 NFL Draft stemming from the Deshaun Watson trade, the team will be looking at young quarterbacks. The onus is on him to make that decision difficult. It starts under the bright lights against Philadelphia Thursday evening.

A.J. Brown coming into his own in Philly

When Eagles front office head Howie Roseman acquired Brown from the Tennessee Titans in a blockbuster draft-day trade this past spring, he imagined the receiver making sweet music with star quarterback Jalen Hurts. Through seven games, the two seem nearly unstoppable. Brown is coming off a three-touchdown outing against the Pittsburgh Steelers and looks like a true star.

It will not be an easy task for Brown and the Eagles’ passing attack against Houston on Thursday. The Texans have yielded a mere five passing touchdowns against eight intereceptions on the season. Brown himself will be lined up against star rookie Derek Stingley Jr. in this one. Should he struggle, it could leave open the possibility of a close game.

Dameon Pierce is one of the few Houston Texans bright spots

A fourth-round pick out of Florida this past spring, Pierce drew rave reviews during training camp and the preseason. In fact, he earned RB1 duties almost immediately. Despite some struggles in last week’s loss to the Titans, he’s played at an exceptionally high clip as a sophomore.

Through seven games, Pierce is on pace to rack up north of 1,500 total yards at a clip of 4.5 yards per touch. Given Houston’s issues through the air, this is a pretty big surprise. He’s one of the team’s few building blocks on offense. And if Pierce is able to put up a stellar outing against Philadelphia, it would take some of the pressure off of Mills while keeping the Texans close.

It’s fair to say that Hurts entered his third season in Philadelphia with major question marks. The team had flirted with the possibility of acquiring Deshaun Watson, among others. It simply wasn’t sold on him as the team’s long-term solution. Boy, how seven games can change things.