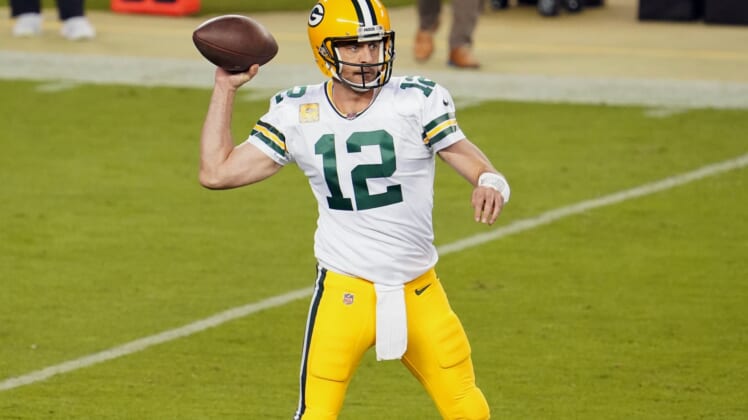 On a night when Thursday Night Football competed with The Bachelorette and another evening of election coverage, the NFL TV ratings for Thursday night’s game between the San Francisco 49ers and Green Bay Packers look promising for the NFL.

While many eyes were glued to news channels to receive updates on the latest results in the 2020 presidential election, FOX and NFL Network did well with a strong night of viewership.

The NFL was already facing a major challenge heading into Thursday night’s game between the 49ers and Packers. While it was a rematch of the NFC Championship Game between two of the league’s most popular teams, it lost much of its luster due to injuries and the COVID-19 pandemic.

Both the Packers and 49ers suffered COVID-19 outbreaks in the days leading up to the game and entered Thursday with several starters sidelined by injuries. Despite the risks and limited practice time for both teams, the NFL stuck to its schedule to maintain its television spot on Thursday night. For the most part, it seemed to work out for the league and FOX.

According to ShowBuzzDaily, the Thursday Night Football game peaked at 9.4 million viewers and finished with an average of 8.7 million tuning in and a 2.4 rating in the 18-49 demographic. These are the preliminary Nielsen TV ratings and they will increase even further when the full viewership data from the West Coast is included.

By comparison, ABC’s The Bachelorette recorded a 1.1 rating with 4.5 million viewers. The show’s highly-anticipated episode drew a sizable audience, but still fell well short of the NFL.

Despite facing stiff competition on Thursday night and dealing with additional circumstances, the NFL held strong. It was an improvement of FOX’s TNF game in Week 8 between the Carolina Panthers and Atlanta Falcons, which drew 8.43 million viewers.

For FOX and the NFL, it represents the latest improvement after a season that began with concerning television ratings.

For the most part, we’ve seen that trend continue this season. Outside of when the NFL went head-to-head with the final presidential debate, either NFL Network or NFLN and FOX have dominated viewership every Thursday night since the season began. However, viewership has dipped from what we saw in 2019.

Given the factors on Thursday night, when many felt the focus should be on the results from the 2020 election, it wouldn’t have been a surprise if FOX’s ratings tanked for the Packers and 49ers game. Instead, potentially a sign many were looking for a distraction, the NFL pulled in an even bigger audience on Thursday night than it had in previous weeks.

Even before the 2020 presidential election cycle began, the NFL had been a target of President Donald Trump during campaign stops. Long critical of players who peacefully protested during the national anthem, Trump routinely criticized the league and those involved in the protests.

The attacks intensified this summer, becoming a rallying point on Twitter and during his rallies. Trump vowed to boycott the NFL and said he’d be happy if the season didn’t happen. Recently, just a day before Election Day, he took another shot at the NFL and went after LeBron James.

After receiving criticism in the past for not pushing back against Trump, the NFL changed course this summer. Following the killings of George Floyd and Breonna Taylor by police officers, professional athletes stepped up and called on team owners and league commissioners to follow

expressed support for the Black Lives Matter movement and acknowledged he handled the players’ demonstration poorly in 2016. Regarding Colin Kaepernick, with athletes like LeBron James calling for a public apology, Goodell said the NFL should have listened to Kaepernick’s message.

With Goodell now speaking out publicly, more players and teams stepped forward when the season kicked off. The NFL pledged $250 million to combat systemic racism and fans witnessed league-wide protests in Week 1, which has continued.

The NFL seemed to weather the storm this season, when viewership saw its steepest dip from the 2019 season. After making it through that, even with players still using their platforms to call for change, the NFL TV ratings have trended upwards. Through it all, television networks have stood by the NFL.

With the election drawing to a close, the NFL could soon be out of its greatest challenge. Once that is behind them for good, with millions of Americans still looking for a distraction, viewership should continue to climb for the remaining NFL games.