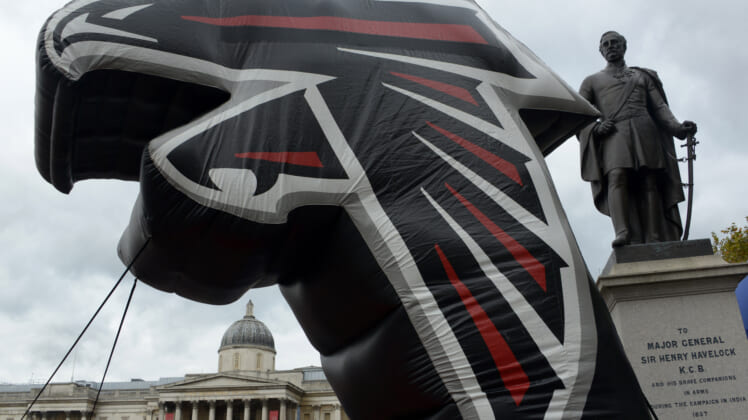 The Atlanta Falcons have never been the NFL’s definition of a stable and consistent franchise. Georgia’s NFL team has found itself often suffering from the Atlanta curse, experiencing more absurd drama than anyone in the league. While curses and bad fortune are to blame for some things, the organization is responsible for recent events and a grim future.

This isn’t about the 28-3 jokes or the Calvin Ridley suspension, those are just the latest instances of the Falcons’ franchise stumbling its way into NFL history by misfortune.

Instead, the inactions and decision-making to come out of Atlanta are responsible for this club facing a bleak future. The Falcons had an opportunity to do the right things, providing a devoted fan base with something to get excited about.

Instead, as we’ll explain below, the current regime is responsible for becoming the NFL’s latest example of how damaging mismanagement can be.

Botching the 2021 NFL offseason and missing a window

The Falcons rightfully made a regime change, replacing general manager Thomas Dimitroff with Terry Fontenot. With an 18-30 record from 2018-’20, a foundational reset was necessary for a team in NFL salary cap hell.

Fontenot made the right moves early in his tenure. Atlanta flipped Julio Jones to the Tennessee Titans for a 2022 second-round pick and a 2023 fourth-round selection. It proved to be the right decision with injuries derailing the former All-Pro receiver before he was cut a year later.

The Falcons also struck gold in free agency. Thanks to head coach Arthur Smith finding the perfect ways to utilize Cordarelle Patterson, the veteran running back exploded and is now signed for $10.5 million through 2023.

Unfortunately, those moves are overshadowed by the organization’s decision before and during the 2021 NFL Draft.

Atlanta found itself in a position to completely hit the reset button. It could trade Matt Ryan –93.3 QB rating in 2020 – to a quarterback-needy team. Keep in mind, Carson Wentz netted the Philadelphia Eagles a 2021 third-round pick and a 2022 first-round selection coming off one of the worst seasons by a full-time starter in NFL history (72.8 QB rating).

While the Falcons would incur a massive dead cap hit and only receive a Day 2 pick in exchange for Ryan, the 2021 NFL Draft set up the perfect opportunity to pull off the quarterback transition.

Justin Fields was the second-best quarterback in the 2021 draft class, viewed as an elite talent who could be the face of the franchise. On his accomplishments, physical skills and scouting report alone, Fields should have been exactly what the Falcons wanted with the 4th overall pick.

Best of all, the 6-foot-3 quarterback was a Georgia native. He played high school football in the Cobb County School District, playing every Friday just a 45-minute drive from Mercedes-Benz Stadium. Fields even signed with the Georgia Bulldogs and would have starred if not for a bad decision by Kirby Smart.

Everything was set up perfectly for the Falcons. Whether they kept Ryan in 2021 or not, Fields represented the next face of the franchise. He was someone with the talent to become one of the best quarterbacks in the NFL and with the regional ties that would instantly make him a star. Instead, despite football fans in Atlanta wanting Fields, the Falcons chose tight end Kyle Pitts.

It felt like the wrong decision at the time and it looks even worse in hindsight. No quarterback in the 2022 NFL Draft stacks up to Fields, some NFL teams even question if there is a first-round talent available.

The Falcons missed their shot to launch a rebuild the right way. Instead, Ryan stuck around with an even worse team and the 2022 offseason did no favors for this regime’s reputation.

With our criticism of the Atlanta Falcons for passing on Fields addressed, it leads to the situation the club found itself in this offseason. The decision made in 2021 should have meant committing to Ryan, allowing the Falcons’ icon to finish his NFL career on his terms in Atlanta.

Except, the franchise only waited a few months before it started thinking about an exit strategy. According to Sports Illustrated’s Albert Breer, the Falcons became aware during the 2021 season that quarterback Deshaun Watson had an interest in playing for them.

Amid 22 civil suits alleging sexual misconduct and assault against Watson, the Falcons’ organization started looking into the young quarterback. Similar to the Cleveland Browns, the club conducted an independent investigation into Watson that didn’t involve speaking to his accusers or their lawyer.

After finding the information they wanted and avoiding questions they didn’t want to know the answers to, the Falcons waited until a grand jury decided not to file criminal charges against Watson. Once that inevitable hurdle was cleared, Atlanta aggressively pursued Watson.

It can be easy for NFL fans to forget Ryan’s importance to the Atlanta Falcons. While he won an NFL MVP award, he’s never been viewed as an elite player and he isn’t a Hall of Famer. However, this is one of the most important figures in the history of professional sports in Atlanta.

Turn back the clock to 2007. Michael Vick, a three-time Pro Bowl selection, meant everything to the Falcons and sports fans in Georgia. It all vanished in moments, another instance of the Falcons’ bizarre history.

Vick pleaded guilty in August 2007 to federal charges for his involvement in a dogfighting operation. The NFL suspended him indefinitely and the Falcons lost everything. A team that went 15-17 from 2007-’26 even with one of the most exciting players in the NFL, collapsed to a 4-12 record.

Ryan, the 3rd pick in the 2008 NFL Draft, provided hope at a point when so many fans were ready to give up on a team that always let them down. Ryan threw a touchdown on his first NFL pass, won Offensive Rookie of the Year and the Falcons made the playoffs with an 11-5 record.

The team made the playoffs in three of its next four seasons, even reaching the NFC Championship Game in 2012. A four-time Pro Bowl selection, Ryan gave fans a reason to feel excitement and optimism. He finished as the franchise’s all-time leader in passing yards (59,735), touchdowns (367) and completions (5,242), more than doubling the marks of the next quarterback.

Perhaps most importantly, in addition to his work with the community, Ryan is the only quarterback in Falcons’ history with more than 60 career wins and he’ll hold the all-time wins record for a decade-plus.

This is the player Arthur Blank – who bought the team in 20002 – and the Falcons’ front office decided it wanted to replace with a quarterback who faced 22 civil suits and additional accusations of sexual misconduct.

Ultimately, the Falcons couldn’t even convince Watson to play for them. However, the front office still muddied its reputation with the Watson pursuit, ended Ryan’s shot of ending his career in Atlanta and reminded the fan base why it’s hard to have faith in this team.

Atlanta Falcons get an underwhelming return in Matt Ryan trade

The Falcons reportedly started exploring trade partners for Ryan at the NFL Combine, in advance of Wentz being traded to the Washington Commanders. It was a moment in the NFL offseason with far more quarterback-needy teams.

While Wentz is younger than Ryan, his contract is arguably worse and he comes with concerning red flags. Ryan carries a significant cap hit and is only a short-term solution, but there’s little doubt he’ll be a better quarterback in 2022.

In addition to absorbing the largest dead cap hit in NFL history, the Falcons only received the 82nd overall pick. Meanwhile, Indianapolis convinced Washington to absorb Wentz’s entire contract and it could walk away from the deal with a pair of second-round picks if Wentz played 70% of Washington’s snaps this season.

There’s no other way around it. Mismanagement by the Falcons’ organization botched the entire situation.

Fans shouldn’t be optimistic about the future. While plenty of this team’s bad fortune happened by chance, the current situation falls squarely on the current regime. The Falcons will be asking fans to support one of the worst teams in the NFL and the passionate sports fans in Atlanta shouldn’t buy it.