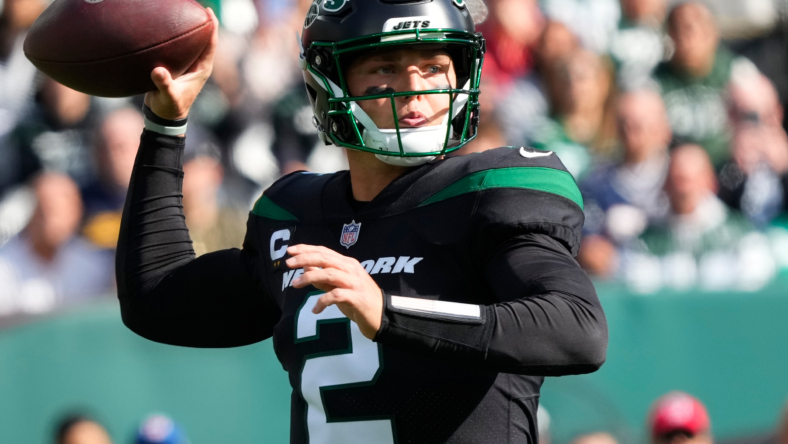 Every week we see wonderful NFL quarterback performances such as Jalen Hurts tossing four scores on Sunday. Unfortunately, not everyone can be Batman, and sometimes there’s a signal-tosser who has to play the villain, especially on Halloween.

We had our fair share of pitiful performances under center in Week 8, but we’ve managed to narrow down the worst NFL quarterback performances down to just four. Who makes the cut?

The follies in Week 8 all started in London at Wembley Stadium with the Jacksonville Jaguars playing a home game on the road. I know, makes no sense. What also didn’t make any sense was the throw Trevor Lawrence made with the game on the line.

With a chance to win, Lawrence instead found Broncos defender K’Waun Williams, who was playing with a full cast on his right arm.

Yet, that wasn’t his only blunder on the day, which makes Jacksonville’s effort as a team even more impressive. The Jaguars offense quickly drove down the field on their third drive, getting the ball on the Denver one-yard line before Lawrence threw an interception directly into the hands of a leaping Justin Simmons. So close, yet so so far away.

The Jaguars have never won a game in which Lawrence has thrown an interception (0-11). If coach Doug Pederson and his QB are searching for a recipe to success, here’s a hint. Win the turnover battle. Lawrence leads the NFL in redzone interceptions (five) since he entered the NFL as the top pick in the 2021 NFL Draft.

Finishing with an average of just 4.3 yards per attempt, Lawrence is one of Week 8’s biggest losers.

Just when we thought Zach Wilson was starting to turn a corner, it turns out, he’s not. Facing the vaunted Bill Belichick New England Patriots defense, Wilson not only lost his first start of the year, but it was how he managed to lose that stuck out to many.

Wilson put up some impressive passing yardage totals, with 355 through the air, his three interceptions are nothing to celebrate. Thanks to Wilson’s effort alone, no one on the Jets is celebrating today.

Especially not Elijah Moore, who “doesn’t know“, why he doesn’t get the ball. For the record, Elijah Moore targets: 1, Wilson’s targets to Patriots defenders: 3.

Wilson also threw four interceptions in a performance against the Patriots a year ago, so one would think the second-year pro would have a better plan, and be much more careful with the football. But, this was a careless throw.

Derek Carr posts a dud in shutout loss to Saints

To say that the Las Vegas Raiders offense has lacked a spark would be massively understating the team’s struggles. Of course, as the team’s starting quarterback, much of the blame falls squarely on the shoulders of Derek Carr. That is especially true after Sunday’s dud.

Carr’s spark plugs need to be replaced, because he lacked any sort of punch playing indoors at the Superdome down in ‘Nola. Amazingly, Carr completed just 15-of-26 passes for a measly 101 passing yards and a touchdown. Even backup Jarrett Stidham who played all of one drive, nearly had as many yards through the air (72).

There’s just no excuse for this type of effort eight weeks into the year. The Raiders went all-out to land Carr what may be his ideal receiver, they also hired Josh McDaniels, who’s supposed to be an offensive guru, but much like we saw during his stint as a head coach in Denver, this offense keeps leaving the defense out to dry.

This loss was embarrassing for Carr? Geez, what about your Pro Bowl pass-catchers? Where are Davante Adams, Darren Waller and Hunter Renfrow? Adams caught one of five targets for three yards. Renfrow one of two for six yards, and well, Waller’s hurt again. Yet it shouldn’t matter, Pro Bowl QBs routinely do more with much less. We need to see Carr get back on track before he finds himself out of the QB race altogether.

This isn’t really fair to Davis Mills. He was never supposed to be an NFL starting QB, but the Houston Texans have been in full-blown tank mode for parts of two seasons now. Mills won’t be headed for the bench any time soon, simply because the Texans haven’t invested into the quarterback position.

Based on Mills’s effort this season, that will change within the first few picks of the 2023 NFL Draft. Sunday wasn’t the worst performance compared to a few others on this list, but Mills led an extremely uninspiring effort.

On the opposing sidelines, third-round rookie Malik Willis only needed 55 passing yards to get the win, yet he was of course helped by a 219-yard, two touchdown game from Derrick Henry. Yet, for Mills, putting just 10 points on the board won’t get it done, especially considering the lone score came in garbage time. It’s not Mills’ fault he didn’t get any support in the ground game.

Mills should have had a much better day against what ranked as the 31st pass defense in football coming into Week 8, only the second-year pro ended up making the Titans look like an elite unit despite being far from good. For that, Mills deserves his spot here.