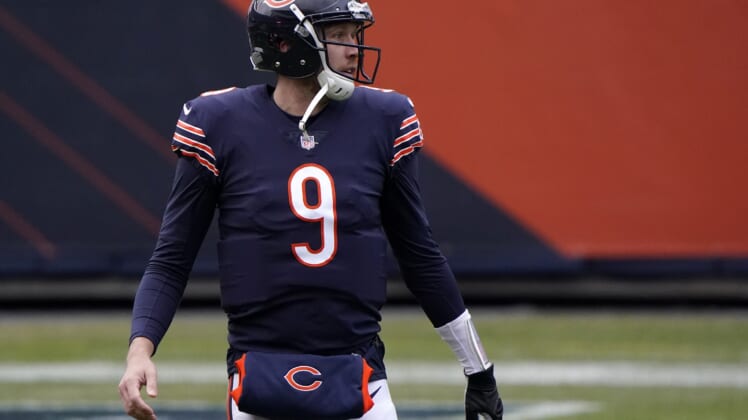 The Philadelphia Eagles have been active in the NFL quarterback carousel, trading Carson Wentz and making a run at Deshaun Watson. It now seems like general manager Howie Roseman could have another card up his sleeve, eyeing a potential trade for Nick Foles.

Before trading Wentz to the Indianapolis Colts, Philadelphia discussed another blockbuster trade with the Chicago Bears. In that scenario, the Eagles would have received draft-pick compensation and Foles. Indianapolis ultimately made the best offer, but it seems a deal for Foles isn’t entirely off the table, per ESPN’s Jeremy Fowler.

“I wouldn’t take a Nick Foles-Philadelphia reunion off the table right now. Because a few weeks ago, when Chicago was looking to get Carson Wentz, they included Nick Foles in a potential package to Philadelphia. Now, Wentz ultimately went to Indianapolis. But those talks have been ongoing, they’re in place, all they would have to do this week is revive them. Philadelphia is looking for a high level backup, somebody to come in and support Jalen Hurts.”

Acquired during the 2020 offseason, many expected Foles would become Chicago’s starting quarterback. He appeared in nine games, making seven starts, posting a 2-5 record and an 80.8 passer rating. After early speculation that he could retain the job in 2021, the Bears signed Andy Dalton and promised him the starting spot.

There likely won’t be much interest in Foles across the league. He carries a $6.66 million cap hit this season and the 32-year-old’s physical talents are in evident decline. But the Eagles are now in the market for a backup quarterback and since Tyrod Taylor is off the board and Gardner Minshew isn’t available, Foles become the most realistic option.

Who will be the Eagles’ starting quarterback in 2021?

The Philadelphia Eagles are in a great spot to draft a quarterback, owning the No. 6 pick in the 2021 NFL Draft. Recent indications from the league suggest four quarterbacks will be drafted within the first six picks, but Philadelphia isn’t expected to be one of the teams making that call.

A year after drafting Jalen Hurts with their second-round pick, the Eagles are poised to build around him as the starting quarterback. It’s risky, given he completed just 50.40% of his passes and had a 75.4 passer rating in his final three starts, but the organization is clearly high on him.

Coming off a disappointing season for the team, Foles might make the fan base a bit happier. He is beloved in Philadelphia after coming off the bench and leading this team to a Super Bowl. Furthermore, he offers plenty of experience that Hurts could learn from. In the club’s eyes, he might be the perfect backup for a second-year quarterback.

Time will tell whether or not the Eagles are making the right decision. They have a shot at Justin Fields or Trey Lance, but the organization is extremely confident Hurts can be the next face of the franchise.