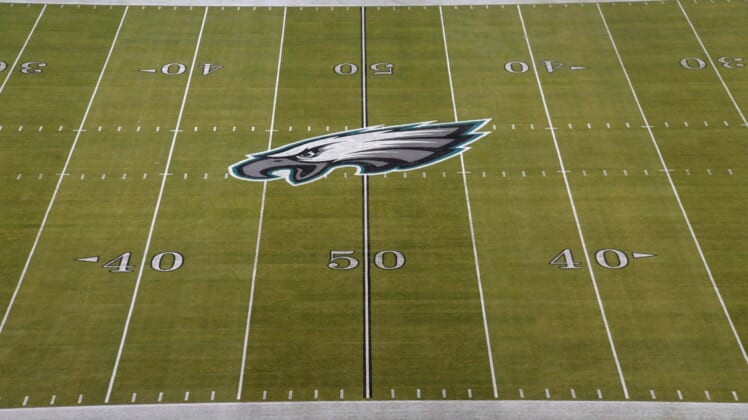 Philadelphia Eagles general manager Howie Roseman has a reputation for adoring some of his players, once even having a life-sized poster of Carson Wentz. While the team’s star quarterback seemed to receive great treatment, another star on the roster had quite a different experience with Roseman.

The Eagles have undergone a significant overhaul this offseason. They fired Doug Pederson, brought in a new coaching staff and traded Wentz within the span of two months. Through it all, Roseman has remained in lockstep with team owner Jeffrey Lurie, seemingly never finding himself on the hot seat.

With the hierarchy in place, new information has come out about just how far tempers escalated in 2018 between Roseman and one of the team’s most beloved players.

The Philadelphia Inquirer‘s Jeff McLane wrote a detailed story about Roseman’s tenure in Philadelphia and his power in the organization. Among the many nuggets of information, it’s reported that Roseman and right tackle Lane Johnson got into a verbal altercation during the 2018 season.

According to McLane, issues between Roseman and Johnson started in September 2018. Following an overtime loss to the Tennessee Titans, in which the Pro Bowl right tackle surrendered a sack-fumble to rookie edge rusher Harold Landry, Roseman confronted Johnson.

The two reportedly had a history of messing with one another, but Johnson was dealing with personal issues at the time. A week after the poor performance, Roseman took a verbal shot at Johnson in front of his teammates, which wasn’t received well by the 2017 All-Pro tackle.

Things got even worse a month later. With the Eagles playing in London, Johnson was dealing with a painful high-ankle sprain that he fought through. Before the overseas matchup against the Jacksonville Jaguars, he expressed concerns to the team about playing another game through the injury.

When Roseman learned about Johnson’s thinking, per McLane, he berated the right tackle for even thinking about sitting out. Johnson’s teammates and coaches were taken aback by the comments, especially at a time when Johnson was in a difficult state physically and personally. Then, when Roseman saw the 6-foot-6 tackle suited up, he walked over to him and said, “Good, you have your mouthpiece in, now you can’t say anything stupid.”

While Roseman intended the comment to be in jest, it set Johnson off. He took off his equipment and told teammates, “I can’t play for this (expletive,” then went to the showers and skipped pregame warmups. Eventually, teammates were able to defuse the situation and convinced him to play.

Roseman later apologized to Johnson on the flight back to Philadelphia and while the relationship between the two is reportedly good as of now.

However, the revelation has to raise alarms about the way Roseman treats certain players compared to others. Even if a general manager believes he has a close relationship with someone in the locker room, failing to understand the gravity of a moment or certain comments reflects badly on him.

For now, the issues seem to be in the past. The Eagles plan to roll with Jalen Hurts as their starting quarterback next season, using the 2021 NFL Draft to build around him. Whether everything works out or not and this team can become a contender again, will depend on Roseman’s ability to start hitting on his top picks and avoiding avoidable confrontations with players.