Atlanta Falcons quarterback Matt Ryan has made it clear on more than one occasion that he’d like to finish his career with the team that selected him No. 3 overall in the 2008 NFL Draft.

Whether Atlanta’s brass feels the same remains to be seen. The team is in the midst of a rebuild and will have to find an heir-apparent at some point soon.

As for Ryan, he’s 36 years old and has two more seasons remaining on his current five-year, $150 million contract. Could a move to a contending team be in the cards?

In addressing this during the NFL Scouting Combine in Indianapolis on Tuesday, Falcons general manager Terry Fontenot wouldn’t commit to the former NFL MVP for the 2022 season.

“I’m not going to say anything about any particular player or any . . . because if I answer that question, we can go through the entire roster and talk about who they are. But I would say we’re going to look to add to every position and try to improve this roster.”

As of right now, Ryan is set to count what would be an NFL record $48.66 million against the cap in 2022. Atlanta would take on a $40.53 million dead cap hit by trading Ryan. In short, it’s not happening with his contract structured the way it is.

From an on-field standpoint, Atlanta doesn’t have anyone to replace Matt Ryan short-term. Any decision would likely have to include the Falcons at least bringing in a stopgap option, especially with the 2022 NFL Draft being seen as weak at the quarterback position. 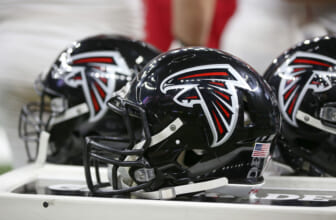 Matt Ryan and the Atlanta Falcons: The finances

That’s the crux of the issue for Atlanta. The team’s old brass structured contracts that pushed large cap hits to future seasons. Fontenot and Co. are now paying the piper. He acknowledged that on Tuesday, too.

“(That’s) the elephant in the room, right?” Fontenot said. “We have some big numbers associated with four players, particularly our quarterback. We have a big cap number, and all those players with the big cap numbers, it’s not their fault. They’re just good professionals that come in and do their jobs. I want to be clear with that.”

Currently $6.59 million under the 2022 NFL salary cap, Atlanta has decisions to make on multiple players. That obviously includes Mr. Ryan.

As noted above, Atlanta would likely want to acquire a starter-caliber quarterback in a package for Ryan. Of the teams potentially in the market, the Indianapolis Colts (Carson Wentz), Cleveland Browns (Baker Mayfield) and Las Vegas Raiders (Derek Carr) could make sense.

In this scenario, the Carolina Panthers would be the likeliest scenario with Sam Darnold heading back to Atlanta.

Either way, the comments from Fontenot on Tuesday will lead to more speculation that Ryan’s tenure in Atlanta is coming to an end after 14 successful seasons.