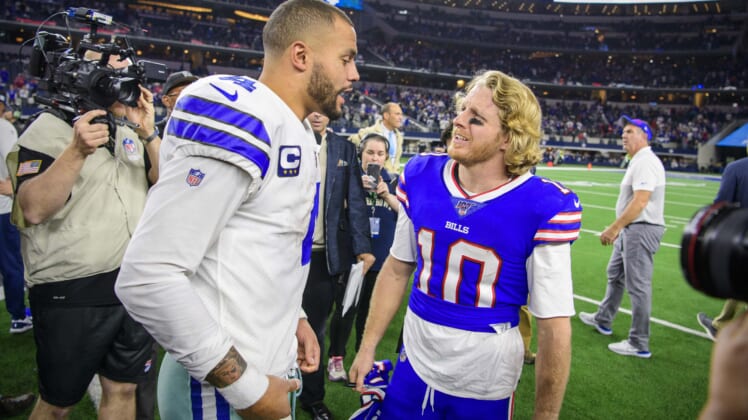 Previously one of the better slot receivers in the game, Cole Beasley has not yet latched on with a team after the Buffalo Bills released him early in the offseason.

Beasley spent his first seven NFL seasons with the Dallas Cowboys after signing as an undrafted free agent back in 2012. His best season in Big D came back in 2016 when the Southern Methodist product recorded 75 receptions for 833 yards and five touchdowns while hauling in 77% of his targets.

Beasley ultimately signed wih the Buffalo Bills in 2019 and was extremely productive in three seasons in Western New York. Still seen as a consistent slot guy, a number of contenders should have interest in Beasley’s services. Below, we look at four ideal landing spots.

First-year Giants head coach Brian Daboll has a built-in relationship with Beasley. He acted as the Bills’ offensive coordinator in Beasley’s three seasons with Buffalo. To say that Beasley performed at a high level during that span would be an understatement.

Back in 2020 with Buffalo, Beasley posted a career-high 82 receptions for 967 yards with Josh Allen tossing him the rock. He matched that 82-catch number last season, too. New York could make sense as it attempts to find struggling young quarterback Daniel Jones more targets.

Whether it’s Deshaun Watson, Jacoby Brissett or another unnamed quarterback under center in Week 1, Cleveland needs to find more depth at wide receiver. The recently-acquired Amari Cooper will start with Donovan Peoples-Jones on the outside. However, there’s still some major questions marks in the slot.

A third-round pick out of Purdue this past April, David Bell is currently on the Physically Unable to Perform (PUP) list. Cleveland also has return man Jakeem Grant on the roster. Obviously, Cole Beasley would be a short-term upgrade over both.

Dallas has a need in the slot. It signed struggling former Pittsburgh Steelers wide receiver James Washington in free agency. The team also has Noah Brown potentially set to compete at an important position in offenive coordinator Kellen Moore’s system.

During his three years working with Dak Prescott in Dallas, Beasley caught 176 passes for 1,819 yards while hauling in 71% of his targets. He’d be an obvious upgrade over Washington behind the big two of CeeDee Lamb and Michael Gallup.

Philadelphia pulled off a major move for star wide receiver A.J. Brown during the 2022 NFL Draft. It also has an high-upside fellow pass-catcher in DeVonta Smith ready to star with him on the outside for Jalen Hurts.

This doesn’t mean front office head Howie Roseman won’t go out there and find more weapons for Hurts leading up to Week 1 against the Detroit Lions.

Quez Watkins is slated to be Philadelphia’s top slot guy in 2022. He was solid as a sophomore last season, registering 43 catches for 647 yards. Even then, finding veteran depth to work with Watkins out of the slot could very well be in the cards for an Eagles team with aspirations to compete with the Dallas Cowboys in the NFC East this season.