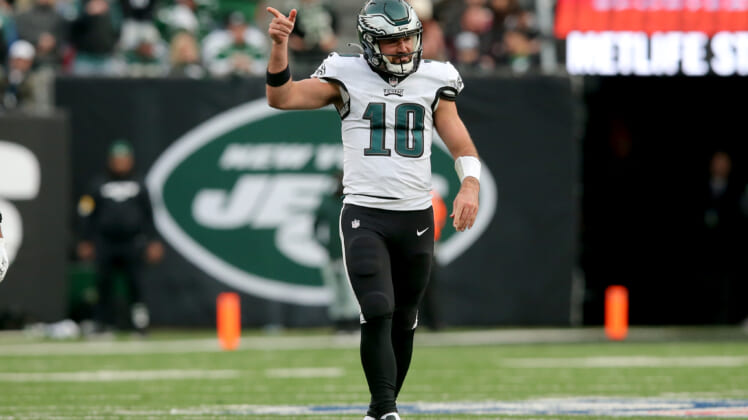 As the quarterback carousel continues to turn, eventually there will be a team who feels left out, without anyone to dance with. One potential solution for these clubs on the outside looking in, is placing a phone call to Philadelphia Eagles general manager Howie Roseman about a Gardner Minshew trade.

Originally selected in the sixth round by the Jacksonville Jaguars in 2019, Minshew ended up making 12 starts as a rookie in which he led the team to a respectable 6-6 record.

Two years later, Minshew still has more wins than any other QB to make starts in Duval. The Jags have gone 4-29 since, including a 1-7 season with Minshew making eight more starts in 2020 before selecting Trevor Lawrence in the following draft.

Once Lawrence came in, despite a QB battle that likely wasn’t much of a true competition under Urban Meyer, the organization traded Minshew to the Eagles for the 198th pick in the 2022 NFL Draft, which is 20 spots later than where Minshew was originally selected at from being the 178th selection in 2019.

Now, Minshew is stuck as a backup to Jalen Hurts, who the team has kind of committed to, but not completely after flirting with Russell Wilson this offseason. Still, after several attempts by Minshew to overtake Hurts as the starter, head coach Nick Sirianni said “it’s not going to happen” in response to making a starting QB change from Hurts to Minshew.

Because of the reasons listed above, Gardner Minshew could be potentially available in trade, if a team presents an intriguing offer. Here are five of the best trade landing spots for Minshew in 2022.

It’s well known that coach Pete Carroll enjoys a friendly competition. The Seahawks have hyped up Drew Lock since they added him in the Russell Wilson trade, but that doesn’t mean they won’t still look into adding to the QB room either via draft or trade. Minshew could be the perfect fit.

Minshew’s competitive, he’s fiery, and he just might be a great team leader if given the chance. Minshew compares favorably to Lock, who also needs another chance to show what he can do.

Whoever is under center for the Seahawks will benefit from a strong core of pass-catchers featuring D.K. Metcalf, Tyler Lockett and the newly acquired Noah Fant at tight end. Defensive lapses aside, there’s no doubt Seattle represents an intriguing scenario for any QB eying a new situation.

If the Indianapolis Colts hope to land a quarterback who gives them a chance to win in 2022, well it appears they’ve missed the boat on the best options who have changed teams this offseason. But that doesn’t mean all hope is lost.

They could still get involved in the free agency market, where Jameis Winston remains the top option available, or they could do what they did last year and trade for a new starting quarterback. One of the perhaps forgotten about quarterbacks of yesteryear is Gardner Minshew.

A year ago, Minshew appeared a sure bet to be traded once the Jaguars landed the No. 1 overall pick. Once the preseason rolled around, he was dealt, but now he’s blocked in Philly by Jalen Hurts. The Colts could throw a lifeline Minshew’s way without having to part with their top 2022 draft picks. After all, they don’t have the ammo to land a big name, with their top selection not coming until pick 42.

Have no fear, they can pivot to a 25-year-old (26 in May) who already has 22 career starts in the NFL. Minshew may not wow anyone with his arm strength or athletic ability, but he still offers more mobility than the hobbled version of Wentz we witnessed a year ago.

Who will be the starting quarterback for the New Orleans Saints in 2022? Right now the answer appears to be Taysom Hill. But he hasn’t necessarily shown anything to prove he can keep the job. Otherwise, a reunion with Winston could very well be in the works. But what if another team outbids them for Winston?

Is Hill the long-term answer or do they need to continue using his skillset as a rushing/receiving threat? The answer will be uncovered during the year, but for now the Saints might like the idea of taking a chance on developing Gardner Minshew for the foreseeable future. He’s under contract for the low price of $2.54 million in 2022, offering the franchise a very affordable starting QB option for next season. Such a trade wouldn’t lock them into Minshew going forward, allowing them to still give Ian Book every opportunity to steal the job, whether it’s next year or in 2023.

Minshew takes his mustache to Carolina

Finally, we get to the team who’s actually been linked to Minshew Mania. As ESPN’s David Newton speculates, the Panthers might have interest in adding Minshew to their QB room.

Trading for Minshew allows them to still keep Sam Darnold‘s $18.85 million salary for 2022, while creating a competitive situation for the best man to win the gig. Landing in Carolina would give Minshew a talented core of skill position players including D.J. Moore, Robby Anderson and Christian McCaffrey plus a unit loaded with talent at every level of the defense.

Minshew could very well come in to Carolina, taking leadership of the team in a way coach Matt Rhule has yet to see from Teddy Bridgewater, Cam Newton and Darnold. Sure Minshew is a bit different, but you can’t question his passion for football, which could be just what this team is missing from the QB position.