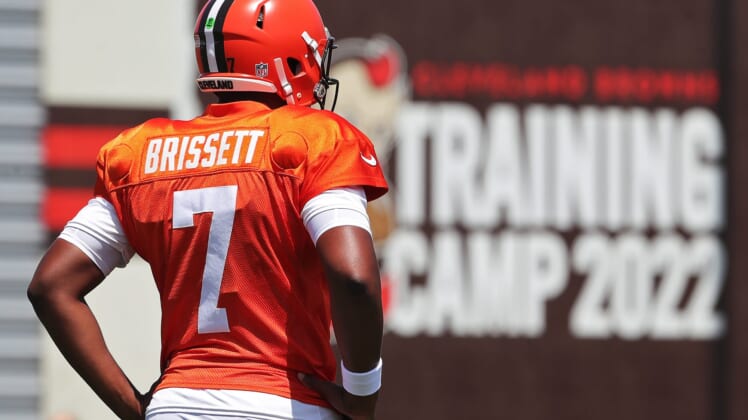 With the length of Deshaun Watson’s suspension now confirmed, the Cleveland Browns appear to have decided Jacoby Brissett is the right man to hold the fort during the 11 games they will be without their starting quarterback.

Mary Kay Cabot of Cleveland.com reported the Browns are not actively pursuing a trade for Jimmy Garoppolo, the one signal-caller available to them who could have presented a viable alternative and, in the minds of most, an upgrade over Brissett.

Cleveland’s decision to put its faith in Brissett places a substantial amount of pressure on the shoulders of a quarterback who is 14-23 as a starter.

The early portion of the Browns’ schedule is unlikely to be daunting to Brissett. While Baker Mayfield will be looking for revenge against his former team when they face his new team, the Carolina Panthers, in Week 1, Cleveland will harbor hopes of a 2-0 start with wins over Carolina and the New York Jets.

Three of Cleveland’s first four games come against teams who finished under .500 in 2021. A Week 4 clash with the Atlanta Falcons follows the visit of the Pittsburgh Steelers.

It is the seven games thereafter that will decide if the Browns can stay in the thick of the postseason hunt with Brissett at quarterback.

Cleveland hosts the Los Angeles Chargers and New England Patriots before going on the road to face the Baltimore Ravens. A Battle of Ohio with the Cincinnati Bengals takes place in Week 8 in Cleveland before the Browns’ bye.

The Browns then face road games with the Miami Dolphins and Buffalo Bills, with a home game with the Tampa Bay Buccaneers the final contest before Watson’s uncomfortable reunion with the Houston Texans.

A Ravens team that was continually hit by injuries in 2021 is the sole opponent in that stretch to finish under. 500 last season and the case can be made that the Browns will be at a quarterback disadvantage in every game of a pivotal run.

Indeed, the Week 10 meeting with the Dolphins that will see Brissett will face off with former teammate Tua Tagovailoa is probably the only game in which the Browns could claim to have an edge under center. It is an oversimplification to look at win-loss records when comparing quarterbacks but, given that the Dolphins went 2-3 with Brissett and 7-5 with Tagovailoa last year, any such claims would not appear to be based in reality.

The Browns will likely look to a run game that ranked first in the NFL in Football Outsiders’ efficiency metric, DVOA, last season to do much of the heavy lifting in the first 11 weeks of the campaign.

Yet the Browns cannot afford to be one-dimensional on offense and, at certain points in that tricky seven-game stretch, they will have to trust Brissett to make decisive plays.

Though he has proven himself a capable fill-in, Brissett’s ability to make those plays successfully against the level of opponent they will face between Weeks 5 and 12 is certainly in question.

Cleveland’s season may well hinge on them avoiding going into a prolonged slump during that extremely difficult seven-game run. He may not be a huge downgrade on Garoppolo, but the Browns sticking with Brissett as their quarterback raises the risk of them enduring a potentially fatal slide.