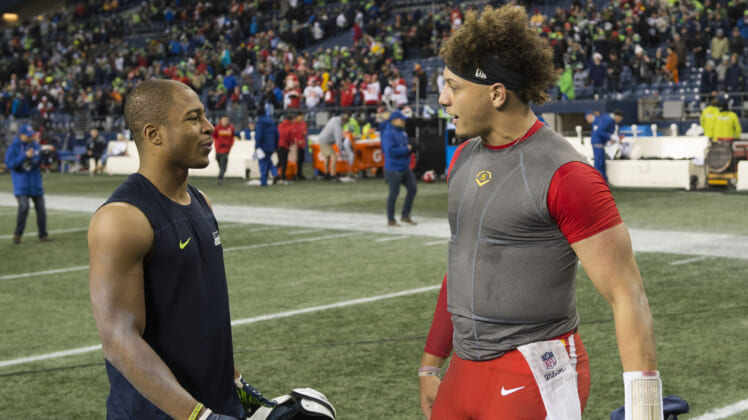 Tyler Lockett could very well be the next Seattle Seahawks star to be moved following the shocking trade of quarterback Russell Wilson.

Seattle appears ready to go into full-scale rebuild mode following the Wilson trade. There’s really no reason for the team to keep Lockett around if that is indeed the case.

According to one report, multiple teams have inquired about the availability of both Lockett and fellow Seahawks wide receiver D.K. Metcalf. Seattle is open to listening to offers for the tandem.

Below, we look at four ideal trade scenarios for the 29-year-old Pro Bowler

Kansas City’s decision to trade Hill to the Miami Dolphins was yet another representation of an NFL offseason filled with blockbuster moves. The Chiefs had been at a standstill as it relates to extension talks with Hill. In lieu of signing him, the Chiefs opted to acquire five draft picks from Miami for the Pro Bowler.

Enter into the equation the possibility that Kansas City opts to make a move for Lockett with some of the capital it acquired from Miami for Hill.

With Kansas City now $26.2 million under the cap following the Hill trade, it can easily take on Lockett’s cap hit while adding other free agents during the second wave. In doing so, it finds Patrick Mahomes another weapon to go with JuJu Smith-Schuster and Travis Kelce.

Now that the Saints have settled on Jameis Winston to be their likely starting quarterback in 2022, general manager Mickey Loomis and Co. have a ton of cap room ($26.34 million). That’s primarily due to contract restructures and the fact that New Orleans wasn’t able to acquire Deshaun Watson.

As it is, this new-found cap room could very well be used to find Winston another weapon to go with Michael Thomas and Alvin Kamara.

As you can see, Lockett has been a consistent weapon throughout his seven-year career. Over the course of the past three seasons, he’s averaging 85 receptions for 1,100 yards while catching 73% of his targets. He’d be a tremendous addition for the Saints and could likely be had for a second-round pick and change.

After the shocking acquisition of Pro Bowl wide receiver Davante Adams, most figured that first-year Raiders general manager Dave Ziegler would be done. Not so fast. Ziegler and head coach Josh McDaniels are going all in with quarterback Derek Carr for the 2022 season and beyond.

Despite lacking a first and second-round pick in the 2022 NFL Draft, the Raiders could still pull off a blockbuster for Lockett. That would include sending a 2023 second-round pick, a 2022 mid-round selection and someone like wide receiver Bryan Edwards to Seattle for Lockett.

It’s not a secret that Bill Belichick and Co. are looking to find young quarterback Mac Jones more weapons. Unfortunately, New England has been largely idle on the free-agent market after being so darn active last offseason. Perhaps, making a move for Lockett could be a way to see Jones progress as a sophomore.

Those are tremendous numbers from a rookie quarterback. Jones also did this while throwing the rock to a less-than-stellar group of wide receivers. By moving off a 2022 second-round pick and change for Tyler Lockett, the Pats would be providing Jones with that legit No. 1 receiving threat.