Appearing on The Pat McAfee Show, Glazer did not mince words when it comes to Rodgers’ status with the Packers in the lead up to training camp.

When Glazer talks, we listen. Those are the rules after the Fox Sports figure broke some of the biggest NFL-related stories of the past half-decade. Now that he’s maintaining the stance that Aaron Rodgers wants to be traded, it’s impossible to ignore the noise.

Breaking down the Aaron Rodgers situation

Embattled Packers general manager Brian Gutekunst has gone on record multiple times since the end of the 2020 season that they have no intention of trading Rodgers. With that said, the reigning NFL MVP questioned his own future in Green Bay immediately following another NFC Championship Game loss this past January.

That’s where the story really got going. One of the greatest quarterbacks in modern NFL history seemingly willing to play in another city. It all started back in April of 2020 when the Packers shockingly traded up for fellow quarterback Jordan Love in the first round of the NFL Draft. Rodgers was not happy. Said unhappiness hasn’t been quieted since.

Coming off a 2020 campaign in which he threw 48 touchdowns against five interceptions, the 37-year-old Rodgers is upset about the direction of the Packers’ organization. He’s also gone on record questioning the culture within said organization. That’s no small thing.

Whether a trade happens this offseason will likely depend heavily on Rodgers’ remaining steadfast in his willingness to holdout throughout the 2021 season. If that is indeed the case, Green Bay might be forced to pull the trigger on a blockbuster trade. 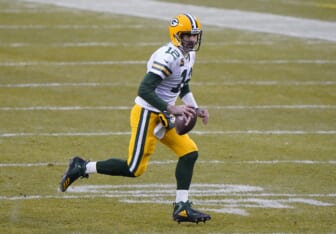 Those are the three teams Aaron Rodgers prefers to be traded to. Now that the San Francisco 49ers are out of the equation, it might be up to the future first ballot Hall of Famer to expand his wish list. If so, here’s a look at other teams who could make sense.