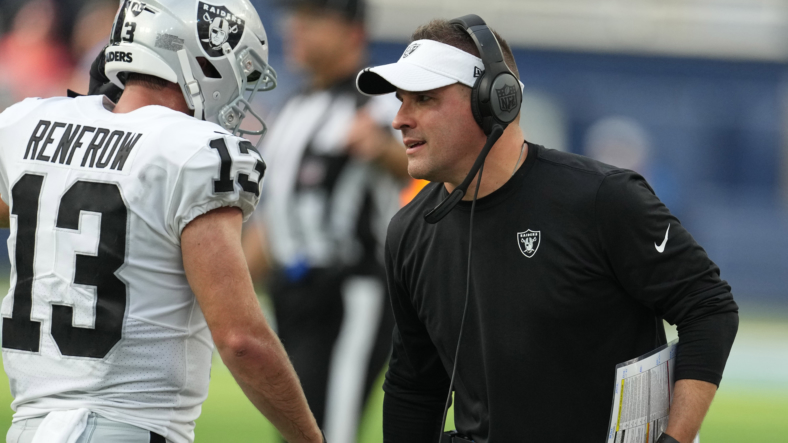 For the first time this season, the Las Vegas Raiders will play in front of Raider Nation inside Allegiant Stadium on Sunday at 1:25 PM as they go up against the Arizona Cardinals.

Last week, the Raiders tried to make a comeback in the fourth quarter but could not quite complete it in a 24-19 loss against the Los Angeles Chargers.

Now this team is focused on the Cardinals, who started last season 7-0 and made the playoffs.

The Raiders are trying to find their groove at whichever speed that comes, especially as the first home game comes for players like wide receiver Davante Adams and coaches like head coach Josh McDaniels.

Here are five things that will be key for the Raiders on Sunday.

Related: 5 big takeaways from the Las Vegas Raiders five-point loss against the Chargers

Raiders need to adjust and avoid making the same mistakes

The key to last week’s loss was the three turnovers that negatively affected the attempted comeback late in the fourth quarter.

Now, with the chance to look at the film, the Raiders have the opportunity to adapt and adjust entering this week ahead of Sunday’s game.

Quarterback Derek Carr said he always wants to improve after each game, no matter the outcome, as he continues his ninth NFL season with the help of coaches, both past and present, such as Jon Gruden.

“I try to learn from every game,” Carr said. “I think one of the big things in my career, no matter what the game was, we always talked about those five plays that keep you up at night. I learned that from coach Gruden and Josh is the same way. We’re going to make sure we correct these. Make sure we’re on top of these, so that we’re better always going forward.

“That’ll never change, whether we won or lost. That has always been the process Josh has and that’s always the process I’ve believed in. And then you go to practice and do those things better.”

The Raiders have plenty of opportunities to make those adjustments, and it is not only with Carr. It could be changes to the number of targets to the wide receivers, the amount of rushing attack, or on other sides of the ball, like in the return game or at the defensive line and the secondary.

Last week against the Chargers, the Raiders’ pass catchers caught 22 of Carr’s 37 passes, with more than half of the receptions going to Adams.

It will be interesting to see what changes are made this week.

If offensive coordinator Mick Lombardi has an even number of targets between Renfrow, Adams, and Waller, it will challenge the minds of opposing defenses on who to defend, something that Kansas City did last week against Arizona.

Chiefs quarterback Patrick Mahomes, who was 30-of-39 on his pass attempts last week, threw at least one pass to 10 different players, and no one had double-digit targets.

The Raiders’ offense employing a balanced approach in the passing game will open up more variety in the playbook while also leading to bigger plays in the running game.

In four of the first five games, the Raiders defense will be facing a mobile quarterback, including Cardinals signal-caller Kyler Murray.

Although Chargers quarterback Justin Herbert rushed for only one yard last week, Murray is going to run and get out of the pocket as he recorded five carries for 29 yards, in addition to his 193 passing yards and two touchdown passes last week.

Former Cardinals teammate Chandler Jones said Murray’s ability to get out of the pocket will be difficult for the Raiders defense to control.

The Raiders need to contain Murray and be able to get to him.

One of the deficiencies to a positive week for the Las Vegas defense last week is they recorded no sacks.

Jones, who recorded 71.5 sacks during his time with the Cardinals, said he hopes this defense takes the next step after a productive performance as a whole last week.

“Every week is an opportunity to get better and you want it to be perfect, but obviously this is the NFL,” Jones said. “The other teams are going to do things that are tasks for us. Hopefully, we can get better and better and gel together. So, that’s our biggest goal is going out and playing together.”

Las Vegas Raiders to watch on the injury report

The Raiders are already dealing with the bumps and bruises during the course of an NFL season as there are six players on the team’s injury report, entering Friday.

Cornerback Nate Hobbs has been dealing with a back injury but was able to be a full participant in both Wednesday and Thursday’s practices.

Lastly, cornerback Sam Webb was limited in Thursday’s practice due to an injury surrounding his ankle.

With the severity of James’ concussion injury, Carr said he has been getting in his reps with James’ backup, rookie Dylan Parham, who has been improving each day playing both guard and center positions.

“You’ve got to make the call, you got to help the other four guys, you got to get everyone on the same page after I make a point and all that kind of stuff,” Carr said of Parham’s center responsibilities. “He’s been such a pro about it, and he’s gotten a lot better since day one.”

Carr added that he is getting as many reps as possible this week with the rookie in the event James does not play on Sunday.

“You try to because of the thousands of reps I have with Andre and then obviously with him being a young guy and learning and moving and the game’s happening faster and all that kind of stuff,” Carr said. “Me making sure I’m taking the snap from him the right way, it’s different with every guy, which is funny to say. It’s different with all of them but making sure that I’m ready for that.”

Take advantage of the home crowd

With Sunday marking the first home game of the season, not only will the players be fired up, but so will the Silver and Black faithful sitting around the field.

Raiders defensive end Maxx Crosby said he can’t wait to take the field on Sunday, as it will be the first home game since last year’s 35-32 overtime thriller against the Chargers to clinch a playoff spot.

“Oh, it’s going to be incredible,” Crosby said. “I already know it’s going to be a great atmosphere. We’ve got the best fans in the world so I can’t wait. It’s been too long. It’s been about nine months now since we’ve been in front of the fans. So, we’re looking forward to it.”

The Las Vegas Raiders and the Arizona Cardinals kick off at 1:25 P.M. PT and will be televised on CBS.

Related: Las Vegas Raiders: Players stock up and stock down for Week 2 vs. Arizona Cardinals