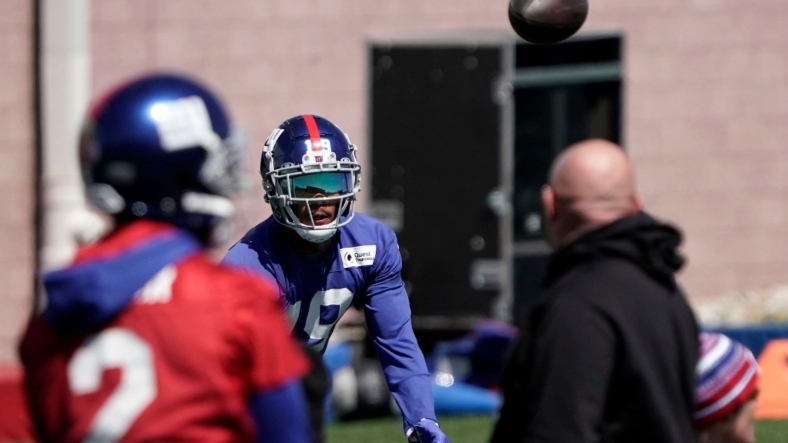 Signed to a four-year, $72 million contract back in 2021 by the New York Giants’ prior regime, Kenny Golladay has not lived up to expectations. The former Detroit Lions Pro Bowler caught just 37 passes for 521 yards in an injury-plagued first season with the team.

Thus far in 2022, Golladay has been even less productive with two catches in as many games. He also played a mere two snaps on offense against the Carolina Panthers in Week 2. It led to Golladay taking out his frustration during a Q&A with the media while leaving open the possibility of requesting a trade.

“I didn’t agree with it. I should be playing regardless. That’s a fact,” Kenny Golladay told reporters recently. When asked whether a trade request could be on the horizon, he responded “We’ll see how it goes.”

To be clear, it’s going to be difficult for the Giants to trade their high-priced receiver in-season. The team would take on a $31.35 million dead cap hit. Meanwhile, an acquiring team would be on the hook for $42.8 million in cap cost over the next two seasons.

With that said, Golladay has proven to be extremely productive in his career. He could also restructure said contract to help expedite a trade. With that as a preface, let’s quickly look at four ideal trade destinations.

Boasting the most cap room in the NFL at $37.19 million, Cleveland could easily take on Golladay’s contract without looking back. It could create some long-term cap issues. But the Browns have made it clear they are in win-now mode. That was obvious once Cleveland exhausted a ton of draft capital in trading for suspended quarterback Deshaun Watson.

As for an on-field fit, Browns wide receivers outside of Amari Cooper have done very little through two games with Jacoby Brissett tossing the rock. Donovan Peoples-Jones is the second-leading pass-catcher at that position with six receptions for 60 yards. He’s also catching just 50% of the passes thrown in his direction. Golladay would be a marked upgrade.

Related: Kenny Golladay proving to be a $72 million bust for New York Giants

As expected, Derek Carr has relied on former Fresno State teammate Davante Adams a lot in the first two games of their reunion tour. In fact, Adams has been on the receiving end of 32% of Carr’s targets thus far. Forcing the ball to the star receiver has yet to be proven fruitful with Carr completing just 50% of his passes and boasting an 80.7 QB rating when targeting Adams.

From a financial perspective, Las Vegas boasts the second-most cap room in the NFL at $14.11 million. It would have to restructure a contract or two to make this work, but general manager Dave Ziegler has proven to be proactive on the trade front. Adding Golladay would be the next example of this.

It’s getting pretty darn ridiculous for Justin Fields in Chicago. Through two weeks, the second-year quarterback has thrown all of 28 passes. That included a mere 11 attempts in a blowout Week 2 loss to the Green Bay Packers. There’s one common denominator here. A lack of weapons. Bears receivers have combined for seven receptions in two games. That’s just gross.

Banking on that iteration of Golladay would absolutely be a risk for first-year general manager Ryan Poles. But you’re not going to turn things around without taking risks. Perhaps, Chicago offers up disgruntled linebacker Roquan Smith while taking on Golladay’s contract and adding draft pick compensation to the mix.

Aaron Rodgers gets that veteran target

It’s been a major point of contention for two-time reigning NFL MVP Aaron Rodgers. Green Bay’s decision to trade the aforementioned Adams shocked a lot of people. Its unwillingness to exhaust financial or draft capital to acquire another proven receiver could end up being Green Bay’s downfall this season.

Running backs A.J. Dillon and Aaron Jones are tied for the team-high in receptions through two games with six. Rookies Romeo Doubs and Christian Watson have caught a combined 11 balls. Something must change here. And while it would take some salary cap gymnastics to make this work, it’s something the Packers certainly must consider.