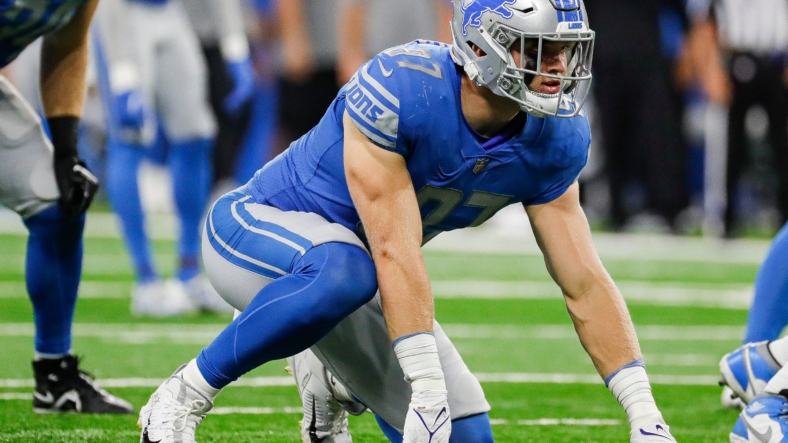 During his time at Michigan, Aidan Hutchinson became a star. Now that the Detroit Lions made the defensive end the second overall pick in the 2022 NFL Draft, that spotlight has only since grown. From Hutchinson singing “Billie Jean” in front of his Lions teammates on HBO’s Hard Knocks to now finally getting a chance to play in the NFL, the 22-year-old Michigan native is making an early impact.

Hutchinson was credited with three pressures and just one tackle in his rookie debut in Week 1 against the Philadelphia Eagles, but Sunday’s matchup against the Washington Commanders delivered a different story.

In just the first half alone, Hutchinson had three sacks on Carson Wentz.

Hutchinson’s first NFL sack came by the product of Wentz not being able to find an open receiver before he had to evade a defender and being forced to step up in the pocket, all while Hutchinson’s Motor City motor was chasing in hot pursuit.

The second came in a similar scenario, where Hutchinson never gave up on the play, as Wentz fails to get rid of the ball as he lost sight of No. 97, who quickly pummeled the QB into the turf.

The third and final sack (so far) came as Hutchinson rushed in on a stunt as Wentz’s offensive front once again can’t hold up long enough for the QB to make a decision.

As always, the Defensive Rookie of the Year competition is stiff in 2022. With top pick Travon Walker snagging an interception to go along with a sack in his NFL debut, he was in the lead chair after Week 1. But now that Hutchinson has secured three sacks in the first half, he’s undoubtedly to become the top ROTY candidate on the defensive side.

Aside from Hutchinson, Kayvon Thibodeaux has yet to make his NFL debut, and two top corners in Sauce Gardner and Derek Stingley Jr. figure to stay in the running as well.

But it doesn’t matter. Rookie or pro, three sacks in one game is incredible, and if Hutchinson can keep up this effort all season, he could be looking at a Pro Bowl season, even as a rookie. We saw Micah Parsons rack up 13 sacks on his way to winning the 2021 Defensive Rookie of the Year award, and that’s likely on Hutchinson’s wish list as well.

Related: Top 2022-23 NFL Rookie of the Year candidates: Travon Walker rises to the top of the crop