The 2022 NBA Draft is set to be held in Brooklyn Thursday evening with the Orlando Magic boasting the top pick. While Jabari Smith is the odds-on favorite to head to Florida, it’s an open question whether that’s going to happen. He’s joined by former Gonzaga star Chet Holmgren as the top options for Orlando.

Selecting No. 3 overall, the Houston Rockets seem to be a prime landing spot for former Duke forward Paolo Banchero. Outside of that, this draft is up in the air.

We’re going to see multiple trades throughout the first round. Could that include the Sacramento Kings moving off their No. 4 overall selection? Veteran players will also likely be dealt, including Atlanta Hawks star big man John Collins. These are among the top-five storylines for the upcoming 2022 NBA Draft.

The defending Western Conference runner-up Dallas Mavericks already sent their first-round pick (26th overall) as the centerpiece in a package to acquire Christian Wood from the Houston Rockets. That’s the first of what we expect to be moves from multiple contenders to acquire proven veteran talent.

The Philadelphia 76ers are reportedly offering up Danny Green and/or Matisse Thybulle as well as the 23rd pick for a veteran. Most recently, they have been linked to Houston Rockets veteran guard Eric Gordon.

Boasting the 21st and 30th picks, the Denver Nuggets could package one of them for a rotational player. They have also been linked to Toronto Raptors star forward OG Anunoby in a broader trade. Meanwhile, it’s being noted that the defending champion Golden State Warriors have no desire to actually make their pick at 28. There’s a few options available to them.

These are just a few examples of contending teams that would rather acquire proven talent than add a rookie who likely wouldn’t crack the rotation in 2022-23. Expect a lot of movement on this front come Thursday evening inside Barclays.

Related: Trades we could see during 2022 NBA Draft

Veterans on the block during the 2022 NBA Draft

We touched on Green and Gordon above. But there’s a number of other proven veterans who could be traded during the 2022 NBA Draft. We’re not talking stars in the truest sense of terms. Rather, impact players who could move the needle in 2022-23.

The Atlanta Hawks are gauging the market for forward John Collins as they attempt to move up from 16 into the top-10. We’re also hearing that the Indiana Pacers are listening on Malcolm Brogdon and Myles Turner as the team looks to retool after yet another disappointing season.

Remaining back east, the Charlotte Hornets are apparently willing to part with one of their first-round picks (13th and 15th overall) to move off the bloated contract of injury-plagued forward Gordon Hayward.

In what is expected to be a top-heavy draft class and with the 2023 iteration looking deeper, it wouldn’t be a surprise if veterans are also moved for future draft capital during the event Thursday evening. That is to say, jockeying around in the first round by using veteran assets to create future draft capital.

As of right now, Jabari Smith seems to be the favorite to land with Orlando at No. 1. It makes perfect sense given his ability to score from all three levels and the match he’d make with super-impressive young forward Franz Wagner.

With that said, there’s this certain aura about Chet Holmgren. His skill-set seems to fit perfectly in the modern NBA. He has unlimited range for a 7-foot big and is already a plus-level passer. Add unlimited upside on defense, and there’s a lot to like here. In fact, his ceiling might be the highest of any draft prospect we’ve seen since Zion Williamson.

For the Magic, this is a franchise-altering decision. They have won a combined 43 games over the past two seasons and have two playoff appearances since the end of the 2011-12 campaign. All said, Orlando has not made it out of the first round of the Eastern Conference Playoffs since Dwight Howard was starring for the team back when gas was under $2.00 a gallon in some parts.

Outside of the big three, Jaden Ivey has been the most talked about 2022 NBA Draft prospect. The former Purdue guard showed out big time for the Boilermakers as a sophomore, improving his perimeter game and defense in the process. He ascended the board big time leading up to the annual event.

How hot of a commodity is the 6-foot-4 guard? The Washington Wizards and Atlanta Hawks are doing their best to move up with the Sacramento Kings at No. 4 to add him to the mix.

While Sacramento has pushed back against that idea, Ivey is said to be disinterested in heading to California’s capital city. This could lead to some draft day wrangling with Sacramento honing in on former Iowa star forward Keegan Murray. It certainly is a major storyline.

Blockbuster trades in the top 10?

Speaking of the Kings, they have had talks with Atlanta surrounding John Collins. The idea would be for Sacramento to move down from four to 16 while adding Collins and more assets to the mix. Sacramento has also been rumored to be talking to the Detroit Pistons about flipping the fourth pick for the No. 5 selection. In this scenario, it’s likely three-and-D wing Jerami Grant would head to the Kings.

Staying out west, the New Orleans Pelicans are looking to move one of the selections they acquired in the Anthony Davis trade (No. 8 overall). Realistically, New Orleans’ target would be a point guard to team up with the recently-acquired C.J. McCollum after he helped lead them to a surprise playoff appearance in 2021-22. Perhaps, Dejounte Murray (Spurs) or Malcolm Brogdon (Pacers) could be target players. 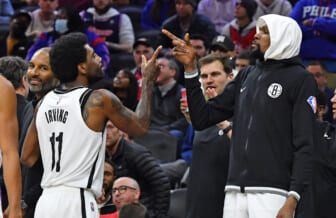 Could we also see a star player or two moved as the top 10 of the 2022 NBA Draft plays out? Kyrie Irving rumors are now more explosive than his decision to avoid the COVID-19 vaccine.

The NBA Draft might get a shot in the arm (pun intended) if he were moved. This would require the Brooklyn Nets star to opt into his contract before Thursday evening. But he seems to be on his way out of Brooklyn. Imagine if something were to happen on this front.