The Kansas City Royals are trudging in mediocrity in the midst of a rebuild. At 33-40, they look poised to miss the playoffs for the sixth consecutive season, which leads to the prospect of them moving veterans before next month’s MLB trade deadline. Whit Merrifield is the first name that comes to mind.

While the 32-year-old is hitting just .272 this season, he’s one of the best pure hitters in baseball. In fact, Merrifield logged 206 base hits in 2019. Merrifield is also versatile, as he has experience starting at second base and all three outfield positions. He’s an offensive staple who can help carry an offense and has been very durable.

Under contract through 2023, it will likely cost a handsome trade package to acquire the veteran slugger. Here are three teams that make sense for a Whit Merrifield trade.

3) San Francisco Giants go for it

It’s officially time to take the San Francisco Giants seriously, if one hasn’t already done so. At 48-26, they own the best record in MLB. At the same time, their roster isn’t flawless, and Whit Merrifield would be an enhancement for their positional depth chart.

Giants manager Gabe Kapler could utilize Merrifield in a few different ways. He could have Merrifield be the starting second baseman from the jump, banking on him being more productive down the stretch. Another option is having him play one of the corner outfield positions, as the Giants’ outfield has been hit-and-miss offensively with the exception of Steven Duggar.

All the while, Kapler could have Merrifield be a super utility starter, playing second base one day and going out to right field on days where they want to load up the order with right-handed hitters to combat a left-handed starter. He would add a proven bat to an offense that leaves a bit to be desired and provide more defensive options.

All that being said, the Giants may refrain from surrendering a haul for a player in his prime given they’ve overachieved and may aspire to keep payroll down for the short term. They can also keep rotating Wilmer Flores, Donovan Solano and Mauricio Dubon at the middle infield positions.

Yeah, the A’s already have 35 people who can play seven positions, but why not add another versatile player for fun? Anyway, Whit Merrifield would add offensive variety to manager Bob Melvin’s depth chart.

Oakland has an array of dangerous power hitters. This includes Matt Olson, Matt Chapman, Mark Canha and Ramon Laureano. This group, though, is a little too reliant on its power ability. There are few players in their order who are accustomed to getting on base by means of contact hitting. Merrifield could do precisely that for the A’s.

The lifelong Royal could hit near or at the top of the order, setting the table for the heavy swingers to drive in runs. Merrifield could start at second base, potentially moving Jed Lowrie to shortstop.

Plus, their corner outfielders have been shaky at the plate and/or get reasonable looks in the designated hitter slot, opening the door for Merrifeld to get reps in the grass. Tony Kemp, who has been an offensive catalyst of late, has played both second base and left field this season.

Whit Merrifield fits the A’s model and gives them a unique skill set for their operation. There’s also the element of them trying to finally make headway in the American League playoffs.

What could get in the way of them making a move for Merrifield? That would be the rare nature of them acquiring players under contract for the foreseeable future, as the A’s tend to rely on their ability to develop players in their system.

The White Sox are loaded, but not as loaded as they projected to be in spring training; Eloy Jimenez, Luis Robert, Nick Madrigal and Adam Engel have missed extensive time due to injury. Madrigal’s season-ending injury looms largest in a Merrifield trade for the White Sox. He would be their answer at second for the remainder of the season.

Imagine an offensive attack where Whit Merrifield is the fourth-best hitter on a team’s mind. That’s downright horrifying for opponents.

Hitting around the likes of Jose Abreu, Tim Anderson, Yoan Moncada and others, Merrifield would be a glue player who further advances manager Tony La Russa’s offense. He could hit in the second half of the order, serving as a second leadoff hitter, if you will. 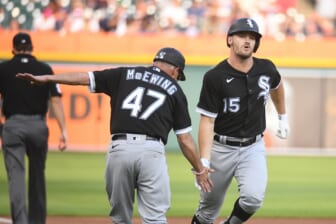 If Chicago goes down swiftly in the first inning, they have Merrifield up in the second to stir up some offense. Frankly, he can make an impact anywhere in the order. As for the outfield, Adam Eaton is hitting .195, rookie Andrew Vaughn has cooled off and Leury Garcia has been underwhelming in the batter’s box. Merrifield is as good, if not a better option at the plate than all three outfielders.

If the White Sox get some of their injured position players back, they have the option to play Merrifield at second permanently, as opposed to flip-flopping him in the infield and outfield.

The White Sox have the starting pitching, bullpen and offense to win the World Series. It’s a matter of shoring up loose ends. Acquiring Whit Merrifield is emphatically shoring up a loose end and then some.