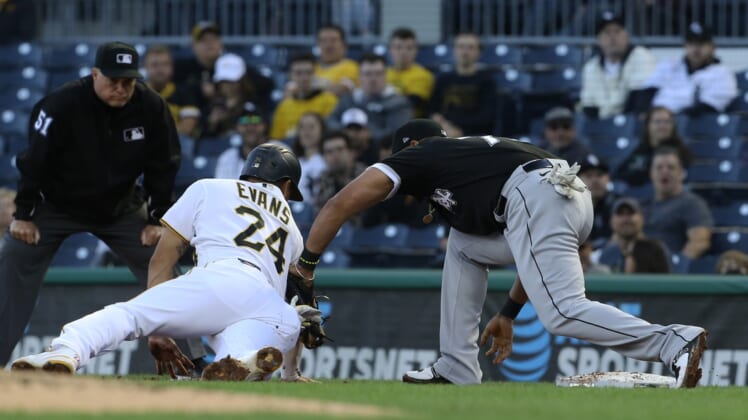 Adam Frazier added a solo homer and walked and scored for the Pirates, who rode a four-run seventh inning to win for the third time in four games.

David Bednar (1-1) got the final out of the seventh for his first major league win, and Richard Rodriguez pitched the ninth for his ninth save.

Yasmani Grandal hit a pinch-hit three-run homer for the White Sox, whose losing streak is their longest of the season.

Chicago starter Lucas Giolito, making his first start against the Pirates since no-hitting them Aug. 25, gave up two runs and four hits in six innings, with two walks and seven strikeouts.

Garrett Crochet (2-4) gave up four runs and four hits in the seventh without recording an out.

In the third with two outs, Frazier ended a 10-pitch, full-count at-bat with his third homer, to right, for a 1-0 Pirates lead.

Frazier led off the sixth with a walk and moved to second on Ke’Bryan Hayes’ groundout. Reynolds looped a single, and Frazier slid under the tag at home on center fielder Brian Goodwin’s throw on the fly to make it 2-0.

In the seventh, Jose Abreu singled with one out and, an out later, advanced to third on Leury Garcia’s single. Grandal followed with his 11th homer, to center, to give the White Sox a 3-2 lead.

Against Crochet in the seventh, Gregory Polanco led off with a single and went to second on Evans’ single. Kevin Newman reached on a bunt single, with third baseman Yoan Moncada’s throwing error allowing Polanco to score for a 3-3 tie.

Gonzalez’s base hit drove in Evans and Newman to give Pittsburgh a 5-3 lead. Reynolds later drove in Gonzalez with a single.