Philadelphia Eagles GM fuels thoughts of selecting a QB No. 6 in 2021 NFL Draft 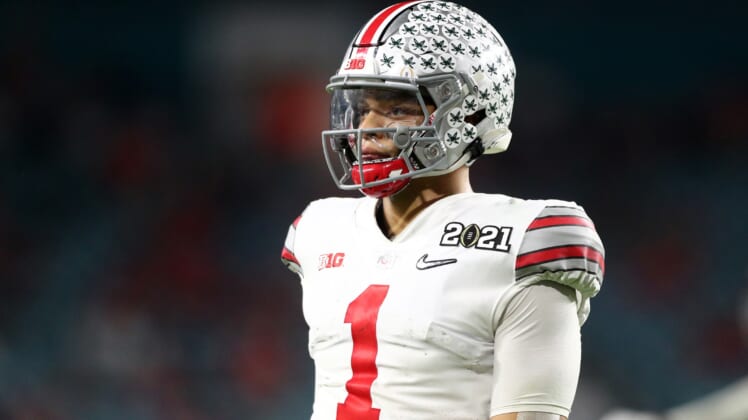 Recently, Philadelphia Eagles CEO Jeffrey Lurie reportedly made it clear that he preferred Jalen Hurts would be granted the starting quarterback job for the 2021 NFL season with little to no competition.

While on the surface the report seemed a bit strange, we may now be gaining more insight into another avenue Philly could take for its quarterback of the future. Then again, it could be another smokescreen. Who knows what to believe anymore?

Now with the official start of the new league year kicking off, teams can finally comment on reported player movement, such as Carson Wentz being traded to the Indianapolis Colts. Typically, when you have a starting quarterback in place, any such questions about selecting a replacement would immediately be shot down. In this case, Philadelphia Eagles general manager Howie Roseman had a few interesting things to say about their plans in the draft as they move forward without Wentz.

Philadelphia Eagles realistically looking at a quarterback in 2021 NFL Draft?

On the same day the Eagles ushered out the old era of Carson Wentz, new coach Nick Sirianni went on to praise Jalen Hurts. However, it was the one who calls the shots in Philly that spoke volumes. General Manager Howie Roseman declared the Eagles “won’t put a cap on what we’re going to do at that position”. He went on to mention the team would consider all options as it approaches a decision about what to do with the sixth pick next month.

At the end of the day, Jalen Hurts was selected when Doug Peterson was the head coach. While Hurts has plenty of untapped potential, Nick Sirianni may very well want to “hand-pick” his own signal-caller. With his job ultimately dependent on wins and losses, moving forward with a player he may not be all that enamored with probably isn’t why he signed up to coach.

Not that the Eagles aren’t thrilled with Hurts, but it never hurts (no pun intended) to see what your options are. Teams don’t pick that high every year. When you do, it’s best to take the most valuable player to your franchise. When you don’t already have a guaranteed starter under center etched in stone, the next highly-rated quarterback is always the best player available when draft day rolls around.

Once the Eagles are on the clock during the 2021 NFL Draft, if a quarterback they graded higher than Jalen Hurts is available, it would be a mistake to select anyone else.

While Trevor Lawrence and Zach Wilson are expected to be long gone by the time Howie Roseman makes a selection, there could be a number of other talented options available. From Justin Fields, Trey Lance and Mac Jones, there figures to be at least one or two quarterback prospects still on the board who are expected to go within the top 15 or 20 picks.

It’s also not impossible to think Nick Sirianni didn’t take the job without the idea in mind that the Eagles were already planning to take a quarterback with their first selection in the 2021 NFL Draft. He had to have known about the Wentz trade, so who’s to say another quarterback drafted in the top-10 isn’t on the way to kickstart his head-coaching career?

If the Eagles draft a quarterback, what does that mean for Jalen Hurts?

It wouldn’t be the end of Jalen Hurts in Philadelphia should the Eagles draft a quarterback in the first round. Of course, it would likely immediately relegate him to backup duties, but one would think he would be placed into a true training camp competition for the starting gig ahead of the 2021 NFL season. Just 22 years old, Hurts has plenty of time to develop into a starter, even if he isn’t handed the keys to the offense immediately in Philly.

At worst, Hurts would still have some trade value. Not to mention, the Eagles typically like to have two solid options at the quarterback position. The Eagles have to invest in the position in some form before training camp gets underway as Hurts is the only quarterback on the roster at the moment.