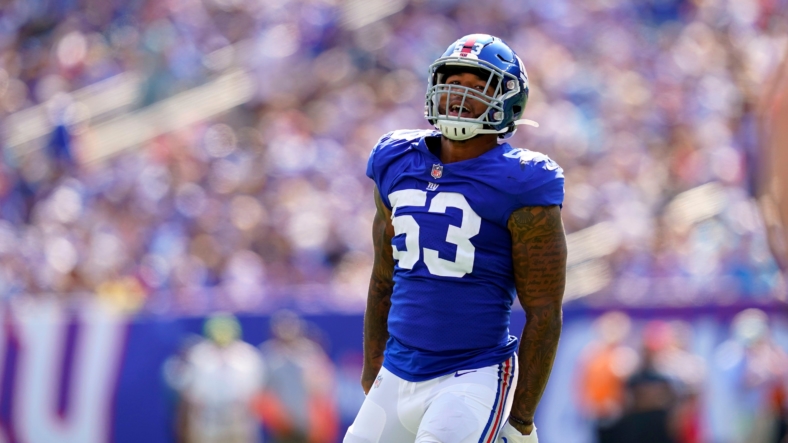 The New York Giants improved to 2-0 this season following their 19-16 victory over the Carolina Panthers on Sunday in their home opener.

This marks the first time since 2016 that Big Blue has started a season 2-0, and if the Minnesota Vikings defeat the Philadelphia Eagles on Monday night, New York will find themselves in sole possession of first place in the NFC East.

For the second week in a row, the Giants made the critical plays down the stretch on their way to a hard-fought win.

Head coach Brian Daboll spoke about his team’s performance after the game.

As is the case with all games, it takes a team effort in order to win. But on Sunday, there were three players that stood out and deserved game balls.

Graham Gano once again showed that he is one of the most reliable kickers in the league. He connected on all four of his field goal attempts, and two of those kicks were over 50 yards, including the game-winning 56-yard field goal.

Special teams are sometimes an overlooked aspect of the game. But Gano showed on Sunday that having a clutch kicker can be the difference between victory and defeat.

Julian Love comes through with the game on the line

Julian Love led the Giants with eight tackles, and two of them were for losses. His biggest play came with just 2:42 remaining in the game when he sacked Baker Mayfield for a nine-yard loss on third down to force a punt.

The Panthers never got the ball back as the Giants’ offense was able to run out the clock. This would not have been possible if Love hadn’t made the biggest play of the game. For that, he gets a game ball.

Oshane Ximines steps up with team’s top pass rushers out

There were concerns about how effective New York’s pass rush would be with Kayvon Thibodeaux, and Azeez Ojulari both ruled out for the second week in a row. But Ximines stepped up and pressured Mayfield often and sacked him once and had two tackles, and had a pass deflection.

There were doubts heading into this summer if Ximines would make the roster. Not only did he make the roster, but he’s showing that he’s a valuable part of Wink Martindale’s defense. We’ll see what his role is once both Thibodeaux and Ojulari come back, but he’s earned his playing time for now.