It seems to be a hot topic each offseason for the Minnesota Vikings. Should they roll with Kirk Cousins for another year or can they allocate their funds better elsewhere? That’s the topic we dive into today.

Cousins was originally signed to be the piece that put the Vikings over the top. Four seasons later, and the Vikings are still searching for their first-ever Super Bowl victory.

It’s not that Cousins hasn’t played well at times, he got the monkey off his back in 2019, winning his first playoff game, but he wasn’t brought in for personal accomplishments, this is a league game smokey. We’re here to win championships.

Many would argue the Vikings could have a better, more well-rounded team if they weren’t paying Cousins $31 million this season to hand the ball off as they say. For example, Tom Brady’s contract has a cap hit of just over $10.5 million this season, ranking 15th in the NFL among quarterbacks. Why does Cousins, a QB with zero NFL rings on his finger make more than a GOAT who has seven championships to his name?

Unfortunately, there is only one TB12 in the world and he’s not heading up North any time soon. Here are the five best QB options for the Minnesota Vikings in 2022.

Should the Vikings fall in love with another quarterback prospect from the 2022 NFL Draft class, which they’ve been scouting quite a bit, the plan for Kellen Mond could go out the window. Or, he’d at least have a fiery competitor for the title of the Vikings QB after Captain Kirk leaves the ship.

There doesn’t appear to be any surefire No. 1 overall pick in the upcoming draft class, but that doesn’t mean there aren’t any franchise options among the group. Nevada’s Carson Strong has a big cannon that would likely play well in the indoor U.S. Bank Stadium. Pitt’s Kenny Pickett has an accurate arm that some might compare to Cousins.

If you want more mobility, Matt Corral of Ole Miss, Cincinnati’s Desmond Ridder, or Liberty’s Malik Willis may be captivating. Then there is North Carolina’s Sam Howell.

Howell entered the 2021 college football season as a popular choice for the No. 1 overall pick in the 2022 NFL Draft. He lost several of his key contributors to the NFL and has fallen down draft boards a bit, but Howell remains a precision passer who also can make plays with his feet. Howell won’t run by many at the NFL level, he’s not what anyone would consider fast, but he’s also not afraid to take off.

At the end of the day, a prospect would have to be extremely convincing for the Vikings to abandon Mond or even Cousins to play a rookie quarterback. That would likely spell an entire regime change, with Mike Zimmer headed out the door. I still don’t anticipate that happening.

Developing Kellen Mond into a starting QB for the Vikes

When Kellen Mond was selected in the third round of the 2021 NFL Draft, there was an immediate buzz among the media, and within the Vikings community. Did general manager Rick Spielman just select the heir apparent to Kirk Cousins? Not so fast.

Viking faithful had their chance to witness Mond in action during preseason play, and while he displayed some unique traits Cousins simply doesn’t have (agility, a willingness to escape the pocket and scramble), he also showed his inexperience. You didn’t hear many calling for Mond when Cousins was being talked about as an early-season MVP candidate, many likely even forgot he was even on the team.

After all, Mond has been a weekly inactive all season, with veteran journeyman Sean Mannion acting as the clipboard holder for Cousins on gameday, helping him prepare during the week as all NFL backup quarterbacks do. There’s nothing to suggest he’s ready to take over for a proficient passer such as Cousins and lead a more-powerful offense. That’s a big leap to take, and likely one that ends in another season missing the playoffs. No thanks. Not yet anyway.

The Las Vegas Raiders are stuck in a similar rut as the Vikings. Both teams are led by veteran Pro Bowl quarterbacks who can make every throw asked of him, yet struggle to get past the first round of the playoffs. Derek Carr has never even won a playoff game, Cousins has one win in the postseason.

However, if you were to ask all 32 NFL GMs whether Carr or Cousins should be a starting quarterback in the NFL, I’d be willing to bet all 32 would say yes.

Both teams are teetering on the totter of contention each season, but lately nobody picks them as true contenders entering the season. Maybe it’s time for a change of scenery for both parties.

Carr involuntarily had a major change this season, when the Job Gruden scandal came about. Cousins has had to embrace seasonal changes as well, with a new offensive coordinator taking over each season of his in Minnesota. Yet with all the hardships both vets have faced, they’ve continued playing their best ball.

As you can tell, the career numbers for both quarterbacks are fairly similar. Cousins completes passes at a much higher rate. Carr doesn’t score as efficiently as Cousins, turns the ball over more, loses more and again, has never played in a playoff game.

The enticing bit for both the Raiders and Vikings may simply be the opportunity to start fresh with a knowledgable, experienced quarterback who is fully capable of playing at an elite level for the next several seasons. While neither team may want to completely wash their hands of the player and take a cap hit, it’s possible they’d be willing to consider a QB swap.

It’s important to note Cousins had his no-trade clause dropped from his 2020 contract extension, which means the Vikings can trade him, but not without taking a $45 million cap hit to their 2022 salary. If a trade were to be worked out, the team receiving Cousins would likely re-negotiate a new contract, removing that $45M anchor from the Vikings’ ship.

For what it’s worth, both QBs are unrestricted free agents after the 2022 season. But Carr has the better contract by far, only counting just under $20 million next season against the cap. To some, that could be appealing enough, even if it means a slight downgrade in performance. 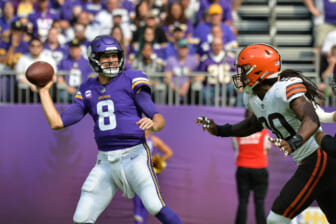 Kirk Cousins returns for another season

It’s been another typical Kirk Cousins season in 2021. At times it looks like he may be one of the best pure passers in the league. In other moments, he seems to almost prefer the checkdown as opposed to the big play. Then, there’s also the mobility issue. He’s been much better at handling pressure within the pocket this season, being sacked just 15 times so far, but he’s not going to gain athleticism as we go. What you see is what you get.

One of the lazier knocks on Cousins in the past is simply not true. He has been clutch the past two seasons, he’s cut his sack rate nearly in half in 2021 compared to 2020, and he’s avoiding turnovers at a career-high rate. In fact, Cousins has the best interception ratio among NFL quarterbacks in 2021, throwing an interception on just 0.7% of his passes.

At the end of the day, the biggest knock on Cousins from fans that consistently watch him play is his albatross contract. If the QB were to consider structuring his contract differently, the Vikings may be able to build a Super Bowl contender once again, like they envisioned when signing him back in 2018. Even though Mike Zimmer isn’t fond of their analytics at times, Pro Football Focus grades Cousins as the second-best QB through 12 weeks.

Vikings fans, bear with me here.

You can hate Aaron Rodgers for a variety of reasons, many people do. However, I believe Rodgers loves the Vikings. Who wouldn’t want to play with Justin Jefferson and Adam Thielen along with Dalvin Cook wreaking havoc out of the backfield? Not to mention, then Rodgers could avoid having the face the headaches of attempting to figure out a Mike Zimmer defense led by Harrison Smith, both of whom Rodgers has expressed a great amount of respect for.

If Rodgers were given the option to select any team other than his childhood-favorite San Francisco 49ers (who passed on him twice now), I bet he’d choose to play for the Vikings.

Think about it. Rodgers has a serious discontent with the organization’s decision-makers and would likely leap at the opportunity to prove them wrong, first-hand. Just as the idea intrigued another former Packers HOF QB in 2009, Rodgers would get the opportunity to beat up on the Packers twice a year.

Rodgers and everyone else around the NFL know AR12 is the machine that makes Green Bay a perennial contender. Why not go out and prove it? Stick it to the team who felt you weren’t worthy of receiving more input.

For the same reasons fans in Minnesota were excited to get Brett Favre after rooting for his demise for 16 years, they’d be just as electrified to get Aaron Rodgers. Because Rodgers has already proven he can get it done.

How can the Minnesota Vikings add Aaron Rodgers in 2022 you ask? It would be tricky. Back in 2008, Favre wanted to be a Viking. Only, the Packers wouldn’t allow it. They went so far to ensure Favre wouldn’t be a Viking by including a “poison pill” in his contract. This stipulation meant if the Jets turned around and sent Favre to the Vikings, New York would owe Green Bay three first-round picks.

The only way for Rodgers to land in Minny is if he somehow got released from his contract altogether. While the Packers and Rodgers reportedly have a pact worked out so they can go their separate ways after this year, that’s more likely to involve a trade, so the Packers can at least recoup some compensation, and you can bet, it wouldn’t be to trade with the Vikings. 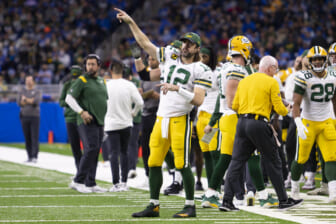