Colder weather has blown into the Northeast and Midwest.

No matter. In Nick Sirianni’s mind, things are ready to blossom.

The Philadelphia Eagles coach feels his 2-5 team is on the verge of churning out victories. They can’t come soon enough for their impatient fan base.

“The results aren’t there right now but what’s going on here is there’s growth under the soil,” he said. “No one wants to see results more than us. We want to see results, too. But it’s really important that the foundation is being built, that the roots are growing out.”

The Eagles can’t ask for a better matchup to display that growth. They’ll face the NFL’s only winless team, the Lions, in Detroit on Sunday.

Philadelphia has lost its last two games — a 28-22 decision to defending Super Bowl champion Tampa Bay and a 33-22 thumping from Las Vegas. The Raiders led 30-7 entering the fourth quarter.

The pass rush has been particularly feeble in those losses, generating no sacks against pocket passers Tom Brady and Derek Carr. The offense has endured its share of woes, especially in the first half. The Eagles have scored a total of 23 points in the last three games prior to halftime.

The Eagles have made two notable trades recently, dealing tight end Zach Ertz to Arizona and backup quarterback Joe Flacco to the Jets. Gardner Minshew is now the clear-cut backup to quarterback Jalen Hurts, while the Ertz deal made Dallas Goedert the No. 1 option over the middle. Goedert had three catches for a team-high 70 yards against the Raiders.

Hurts has thrown for 10 touchdowns and rushed for five more, but the Eagles have scored 22 or fewer points five times.

The Lions (0-7) faced their longtime quarterback for the first time last weekend and nearly pulled off an upset. They lost to Matthew Stafford and the Los Angeles Rams 28-19. Detroit trailed by only six in the late going but Jared Goff was intercepted in the end zone with 4:53 remaining.

The Lions have also suffered two crushing defeats on long last-second field goals. They’ll have a bye week after Sunday’s game, and coach Dan Campbell hopes the breakthrough will come before the breather.

“The same thing that makes this game so tough and hard is the same thing that just makes it unbelievably exciting and blissful, if you will, to get a win because they’re so hard to come by,” he said. “You’ve got to earn them. It would mean everything, particularly going into the bye.”

D’Andre Swift leads all running backs with 42 receptions and 391 yards. He turned a short pass into a 63-yard touchdown against the Rams.

He was limited in practice on Wednesday due to a groin injury but is expected to play.

Rookie receiver DeVonta Smith missed Wednesday’s practice due to a migraine. The Eagles’ biggest injury concern is running back Miles Sanders, who didn’t practice on Wednesday due to ankle and foot injuries. If he can’t go, Kenneth Gainwell and Boston Scott are expected to split the backfield carries. 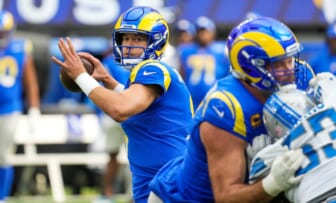