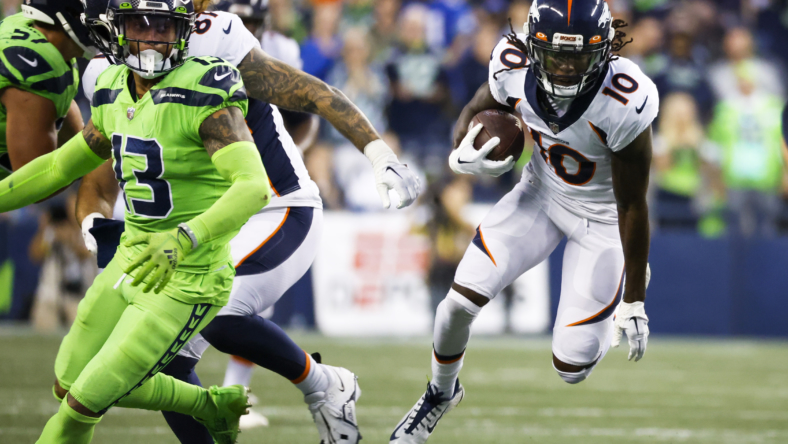 The Denver Broncos find themselves at a crossroads right now. Mere months after exhausting a ton of draft capital and a huge contract on Russell Wilson, Denver is 2-5 heading into its Week 8 outing against the Jacksonville Jaguars in London.

Three games behind the Kansas City Chiefs in the AFC West, there’s really no path to a playoff appearance for the team. Meanwhile, first-year head coach Nathaniel Hackett is already on the hot seat.

With so many things going wrong for the Broncos, reports suggest that they are listening to offers for several impending free agents and veteran players.

It makes sense. Denver is without its first-and-second-round picks in the 2023 NFL Draft stemming from the aforementioned Wilson trade. While general manager George Paton looks to find a happy medium between contending and long-term relevance, it makes perfect sense to move off a couple of these players ahead of the NFL trade deadline on Tuesday. Below, we look at five scenarios.

Gordon has made it clear he’s not happy with his role on the Broncos. Even after youngster Javonte Williams went down to a season-ending injury back in Week 4, Gordon has not received steady playing time. In fact, he played just nine snaps back in Week 6 due to fumble issues.

In short, Gordon doesn’t have a future in Denver. That’s where the Philadelphia Eagles come into play. They are looking for another back to pair with Miles Sanders and were in on Christian McCaffrey before he was dealt to the San Francisco 49ers. Philadelphia can offer up a mere fifth-round pick in next year’s NFL Draft to entice the Broncos. That’s roughly Gordon’s value right now.

A third-round pick of the Broncos out of Ohio State back in 2019, Jones has morphed into a solid 3-4 pass-rushing defensive end. Thus far this season, he’s recorded five QB, hits, five tackles for loss and 4.5 sacks. At issue here is Jones’ status as an impending free agent. The cash-strapped Broncos simply might not be able to afford him on the open market.

Acquiring an additional third-round pick in the 2023 NFL Draft and a mid-rounder the following year would give Paton some flexibility moving forward. As for the Vikings, they need to add another defensive end to the mix despite a surprising 5-1 start to the season. Jonathan Bullard (3.5 sacks in 76 career games) is seeing too much action.

From high-upside rookie back in 2020 to someone who has not made any impact at wide receiver this season. That’s where this former second-round pick from Penn State is right now. He’s recorded all of five receptions in six games this season.

With that said, multiple teams are interested in acquiring him as a cheaper alternative to teammate Jerry Jeudy. Hamler’s ability to stretch the field is seen as a plus (14.2 yards per reception throughout his career). In this scenario, the Denver Boncos send Hamler to a receiver-needy Rams team for another 2023 mid-round selection.

Bradley Chubb sent to the Tampa Bay Buccaneers in blockbuster

Yet another impending free agent, Denver could very well opt to place the franchise tag on Chubb ahead of the new league year starting in March. At issue here is the fact that said tag would cost the Broncos roughly $25 million against the cap. They just don’t have that cash.

As you can see, the 26-year-old Chubb has been among the most-productive edge rushers in the NFL this season. Despite his status as a free agent following the 2022 campaign, Chubb should still would net a large return.

From the Buccaneers’ perspective, they have to do something in order to overcome an ugly 3-4 start to the season. While there might be more pressing needs than edge rusher, Chubb would make an absolutely perfect fit next to Shaquil Barrett. In turn, Tampa Bay offers up its former first-round pick in Joe Tryon-Shoyinka and a second-rounder next April. It’s a nice haul for Denver.

Noticing a theme here? The Denver Broncos are going to have to figure out the finances that came with handing Wilson a record contract. Set to become a free agent following next season, Jeudy might very well look to be extended this spring. If so, Denver will have to figure out a way to make it work.

Instead, rumors suggest that the Broncos are listening to offers for the former first-round pick from Alabama. He would likely net the largest return of any player listed here. It also must be noted that the Broncos have capable receivers moving forward in that of Courtland Sutton and the injured Tim Patrick.

It’s in this that moving Jeudy makes a ton of sense. In this scenario, he lands with a surprising Jets team that could use another weapon for Zach Wilson. In turn, the Broncos add a talented young receiver in Moore as well as a second-round pick in next year’s NFL Draft.

Let us know what you think about our Denver Broncos trade scenarios in the comments section.