London Falling? Nathaniel Hackett’s job may be on line with Broncos 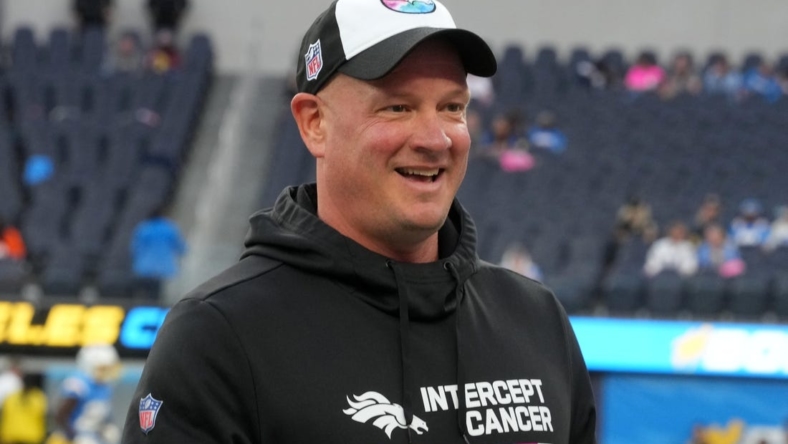 A battle between 2-5 teams in London that starts at 9:30 a.m. ET wouldn’t typically draw much interest stateside, but Sunday’s game at Wembley has plenty of storylines.

Broncos quarterback Russell Wilson said he is “ready to rock” against the Jacksonville Jaguars after missing last week’s loss to the New York Jets. He’ll be back in the lineup and trying to keep the Broncos within shouting distance in the AFC playoff picture.

Wilson might also be fighting for his head coach’s job.

Carolina’s Matt Rhule was the first head coach let go this season, and Denver’s Nathaniel Hackett is the current -150 favorite at SportsBetting.ag to be the next one to go.

It’s highly unusual for a first-year NFL coach to be fired midseason, but Hackett has been under intense scrutiny since the Broncos’ season-opening loss at Seattle. One of the most coveted assistant coaches in the league, Hackett was hired away from the Green Bay Packers over the offseason, but that was under a different ownership group.

Wilson was given a five-year extension after being acquired from the Seahawks despite having two years left on his contract. While he has received his share of the blame for Denver being ranked 23rd in total offense, Wilson isn’t going anywhere anytime soon.

ESPN reported Wednesday that there is some chatter in league circles that Hackett’s job could be on the line Sunday. After a promising start, the Jaguars have dropped four consecutive games but are still 2.5-point favorites at BetMGM to beat the Broncos and 2-point favorites at DraftKings.

Hackett leapfrogged Arizona’s Kliff Kingsbury as the favorite to be the next coach fired after the Cardinals routed New Orleans to open Week 7. The return of wide receiver DeAndre Hopkins helped spark the Cardinals’ slumbering offense and Kingsbury is now being offered at +250 after being the -105 favorite last week.

Reich and Campbell entered the season in very comfortable positions. Reich because the Colts were expected to be a potential threat to the favorites in the AFC and Campbell because the Lions appeared poised to finally compete for a playoff spot.

The expectations in both cities have fallen flat.

Indianapolis has benched quarterback Matt Ryan, the latest veteran offseason acquisition to flop for the Colts, following in the footsteps of Carson Wentz, who replaced Philip Rivers after just one season. Reich has reportedly been in high-level meetings involving owner Jim Irsay and general manager Chris Ballard.

Detroit won its opener and the offense was flying high in September. But the Lions have since dropped four consecutive games and have scored a total of six points over their past eight quarters. They lost 24-6 to Dallas last week coming out of their bye week.

One coach who has seemingly removed himself from the hot seat – at least temporarily – is Rivera. Washington’s third-year head coach has seen his team win consecutive games to crawl back into the NFC playoff picture despite Taylor Heinicke replacing the injured Wentz.

The Commanders will face Sam Ehlinger on Sunday in his first career start for Indianapolis. That could be a critical game for Washington, which plays host to Minnesota in Week 9 before a trip to Philadelphia.