The Minnesota Vikings will open the NFL preseason in Week 1 at home against the Denver Broncos. This will be a battle of two teams searching for their identity and hoping to challenge for the playoffs in 2021. Check out our preview of this exhibition matchup below.

Broncos vs Vikings: What you need to know

Because Bridgewater has journeyed quite a lot around the NFL, he seems like a better candidate to adapt to the odd circumstances of the preseason over Lock. That said, there’s no question Lock has superior arm strength and gives the offense a higher ceiling. 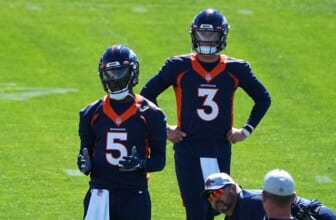 Will the Broncos or Vikings make the postseason in 2021? Click here for our NFL playoff predictions

His father was a stellar NFL cornerback, and even though pedigree was on his side, it’s nevertheless impressive that Patrick Surtain II lived up to the hype and shined at Alabama. The Broncos were pretty deep at the position, yet still selected Surtain ninth overall in the 2021 NFL Draft — even with the likes of Justin Fields and Mac Jones available.

It’s not like the Vikings would play Justin Jefferson even before he sprained his AC joint in practice. Bisi Johnson is out with a torn ACL for Minnesota, too, so the Vikes are pretty thin in their receiving corps at the minute.

Good news: Darrisaw won’t likely have to face Von Miller or Bradley Chubb at all in this one. Also, Broncos coach Vic Fangio isn’t bound to throw too many exotic stunts at him, as preseason schemes are rather vanilla and uninteresting.

Where do the Broncos fall in our NFL defense rankings? Click here to see how highly regarded they are

The Broncos may be wary of giving Javonte Williams too many touches in exhibition play, but the first-year tailback out of North Carolina could use the experience, because Denver will be counting on him to be part of a dynamic duo alongside Melvin Gordon.

Stalwart veterans like Danielle Hunter, Eric Kendricks and Anthony Barr are likely to sit for Minnesota, which should give Williams a little more running room than he’d have otherwise.

The bottom line: The Broncos are in the midst of a QB derby, and the Vikings’ backups behind Cousins are nothing to write home about. For that reason alone, this should be a relatively easy victory for Denver.