With incumbent Drew Lock and newcomer Teddy Bridgewater battling it out for the Denver Broncos’ starting quarterback job, the latest buzz out of the Mile High City suggests the two signal-callers could be competing in all three preseason games.

NFL Network’s James Palmer provided the latest update on the Broncos’ QB competition, saying, per NFL.com’s Kevin Patra, “This could go, to my understanding, through all three preseason games before they make a decision.”

The report also stated that Denver has only made about two to three percent of its QB evaluations to this point, meaning that training camp practices and preseason games will loom large.

The Broncos open up training camp for their veteran players on July 29. In lieu of a blockbuster Aaron Rodgers trade, they hope to clearly identify a viable leader for the offense in preparing to compete in one of the NFL’s toughest divisions, the AFC West. 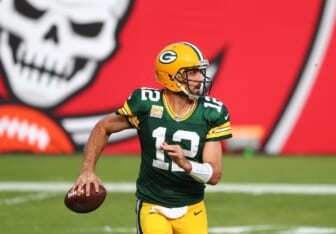 Drew Lock’s athleticism, arm strength and upside shouldn’t be given up on

It’s only Lock’s third season, and he had to change offensive coordinators last year to Pat Shurmur, a traditionally headstrong, stubborn, unwavering personality. Shurmur probably didn’t make anything easy on Lock, despite the extraordinary circumstances of the 2020 campaign.

Little wonder Lock struggled so mightily adjusting to a new offense. He’d just gone 4-1 as a starter during his rookie year, and was probably feeling himself. We saw a similar sophomore slump from Baker Mayfield when he changed offenses, remember? 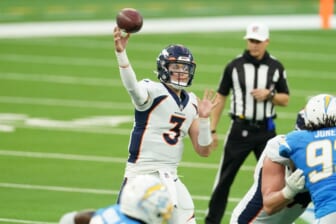 Lock has been working with Peyton Manning during the offseason on how to attack the position at the highest level, which can’t possibly be a bad thing. By all accounts, he’s doing everything he can to bounce back from an underwhelming season.

When compared to Bridgewater, Lock clearly has the superior arm to stretch the field and challenge the defense vertically. He’s also more mobile and athletic than Bridgewater, and more inclined to make off-schedule plays.

All these facets give Lock excellent upside, and his presence indubitably raises the ceiling on Denver’s offense.

In stark contrast, Bridgewater has pretty much maxed out his potential to this point, and what you see is what you get. He doesn’t have a special arm, he’s decently athletic but won’t wow you, and he’s risk-averse.

None of this is meant to bash Bridgewater. It’s just what he is, and obviously, the major knee injury that put his career in jeopardy plays a part in some of his physical limitations. 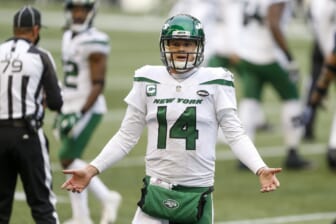 Bridgewater is a tough leader whose intangibles are what any team dreams about at the position. He’s also arguably surrounded by the best supporting cast of his career. Courtland Sutton, Jerry Jeudy, Noah Fant and KJ Hamler are a dynamic pass-catching group on paper.

If he can just be a game-managing distributor type of point guard in Shurmur’s system, Bridgewater might actually shine and experience a resurgence in Denver.

The Carolina Panthers traded Bridgewater away essentially for peanuts, because they believed Sam Darnold could elevate their passing attack to another level. Lock’s skill set isn’t dissimilar to Darnold’s, and Lock at least has one promising stretch of winning football on his resume.

But here’s the thing: Broncos head coach Vic Fangio and Shurmur are very much stuck in the 1990s with their way of thinking offensively. They know they’re loaded at the skill positions, and aren’t going to want a freelancing, borderline cocksure, young gunslinger putting their jobs in jeopardy. They’ll want someone like Bridgewater, who won’t make the critical error and keep them in games.

It seems pretty clear that Bridgewater is going to be the preferred choice of Fangio and Shurmur. The problem is, Bridgewater ultimately couldn’t get it done in Carolina because he didn’t take enough chances, and didn’t deliver in the clutch when the Panthers were in striking distance to win in the fourth quarter.

Lock may be more erratic, inaccurate and inconsistent, but maybe, just maybe, he’s the risk-reward type of passer the Broncos can rally around. We know Bridgewater isn’t on the same level as AFC West counterparts Patrick Mahomes, Justin Herbert and Derek Carr. Lock’s destiny isn’t so clearly written yet.

Letting the competition drag on too long doesn’t seem to be a concern for the Broncos, based on this latest report. However, not letting one player get comfortable as the starter may be detrimental to the entire fate of the team.

Operating under the assumption that the Lock-Bridgewater battle will, in fact, extend for the entire preseason, if it’s close, Lock should get the nod. Unfortunately, because reps are going to be split so evenly, the veteran with more experience is bound to handle those circumstances better.

Look for Bridgewater to start the 2021 season, but don’t be surprised if a few early, close losses trigger a move to Lock that might be too little, too late for Denver to salvage a playoff spot.