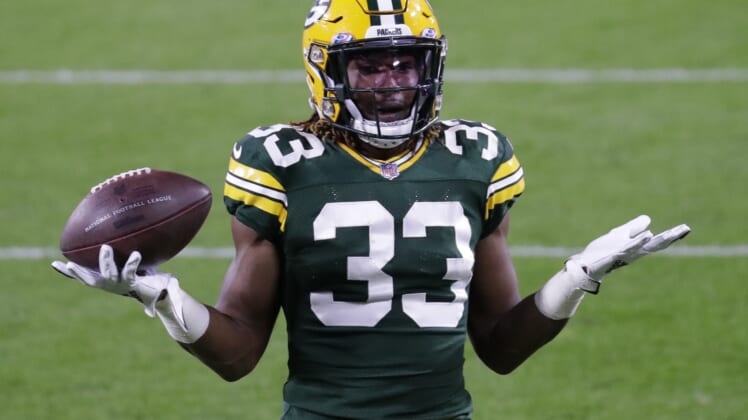 NFL fans have clamored for Aaron Jones to be unleashed for years. Set to become an unrestricted free agent, the Green Bay Packers star will likely be set free into the open market this offseason and a big contract could follow.

Jones, a fifth-round pick in the 2017 NFL Draft, was a sensation in Green Bay’s offense. He was the NFL’s co-leader in rushing touchdowns in 2019 and made the Pro Bowl this past season. After turning 26 years old in December, the 5-foot-9 and 208-pound back will be unleashed into free agency this offseason. Unsurprisingly, he is one of the top players expected to be available this spring.

Negotiations between Aaron Jones and the Green Bay Packers haven’t gone well. Before firing his last agent, Green Bay offered him a contract that would have made him one of the highest-paid running backs. However, the offer reportedly lacked any significant guaranteed money. Jones fired his agent, hired Drew Rosenhaus and talks have been at a standstill.

Given the team’s tight cap situation, Jones is expected to walk this offseason. Green Bay declined to apply the franchise tag, which would have guaranteed his return. While the Packers have made contract offers, including a recent proposal that seems insulting, Jones is ready to hit the open market.

While that means becoming a free agent at a time when several clubs will watch their spending, talent doesn’t go unrecognized. Jones is the top running back available this offseason and, just entering the prime of his career, he’ll have plenty of attractive offers to choose from.

He likely won’t crack more than $13-plus million annually, with significant guarantees and a signing bonus. Joe Mixon’s four-year, $48 million contract might be viewed as the best template clubs are willing to work around. Jones is an all-purpose back and while there are some durability concerns, he also doesn’t have a ton of carries already on his resume.

With the typical drop-off for running backs coming around their age-30 season, teams can focus on a four-year contract with Jones. Most of the guaranteed money can be paid out in the first two years of the deal, creating flexibility to cut him halfway through the contract. In that scenario, Jones could still walk away with $25-plus million after two seasons and would then hit free agency again before he turns 30.

Arizona brought back Kenyan Drake on the transition tag in 2020 and things didn’t quite work out. Entering the offseason with a need at running back, this offense would benefit tremendously with a more balanced attack and a running game opponents feared. Furthermore, Jones would be an exciting fit in this scheme.

He caught 47-of-61 targets this past season, turning those grabs into 355 yards and two touchdowns. He can motion out of the backfield, making plays as a receiver and has proven to be just as explosive carrying the football. He averaged 3.54 yards after contact and forced 38 missed tackles last season, per Pro Football Focus.

Putting Aaron Jones in the backfield with Kyler Murray would really unleash Arizona’s offense and these two would be an electrifying pairing for several years. The Cardinals already showed some aggressiveness by signing J.J. Watt. If the front office is serious about winning now, this would be a fantastic addition to the offense.

Miami likely has its franchise quarterback in Tua Tagovailoa, but he needs a strong running game to support him. He had that Alabama and the results were outstanding. The Dolphins must recognize the importance a consistent rushing attack and that will make adding a high-end running back one of the team’s bigger priorities this offseason.

Related: 4 best running back options for the Miami Dolphins during NFL offseason

Miami has significant cap room and could free up even more by cutting some dead weight. Jones is dramatically better than anyone on this roster and he could be set free as the featured back in this offense. Plus, playing football and living in Miami feels like the dream. Fantasy owners keep wanting Jones to be the workhorse in an offense and he would take on that role for the Dolphins. If they improve their offensive line in the 2021 NFL Draft, this situation is even better. If you’re looking for the favorite to sign Aaron Jones, bet on Miami.

Yes, the Jets have bad memories from Le’Veon Bell. But there were warning signs with him, including the fact that he spent a year away from football. New York made a bad decision, but that doesn’t mean Aaron Jones would be a mistake. Mike LaFleur’s offense needs a running back like this; it’s the backbone for what helps this scheme be successful.

With more than $50 million to spend, New York can get away with a front-loaded contract that gives Jones the guaranteed money he wants early in the deal. Pair Jones with a Zach Wilson or Justin Fields and this offense becomes entertaining next season. With a dual-threat quarterback and improved offensive line play, Jones could surpass 1,500 scrimmage yards in 2021. There might be an AFC East battle for Jones’ services, but this is one the Jets can win. With him on board, New York can use its early draft picks on the defense, offensive line and wide receiver.

This is the dream landing spot. Kyle Shanahan has made gold out of a running game that featured the likes of Jeff Wilson, Raheem Mostert and Jerick McKinnon in recent years. He’d certainly love to upgrade over Jimmy Garoppolo, but that doesn’t seem to be in the cards for San Francisco. So, with receiver largely addressed, Shanahan can upgrade at running back. Jones is perfect for this system and he is plenty comfortable being a featured back who still shares some touches. The 49ers can make room for him with a few easy cap casualties, opening the door for Jones to become the piece that puts this offense over the top.