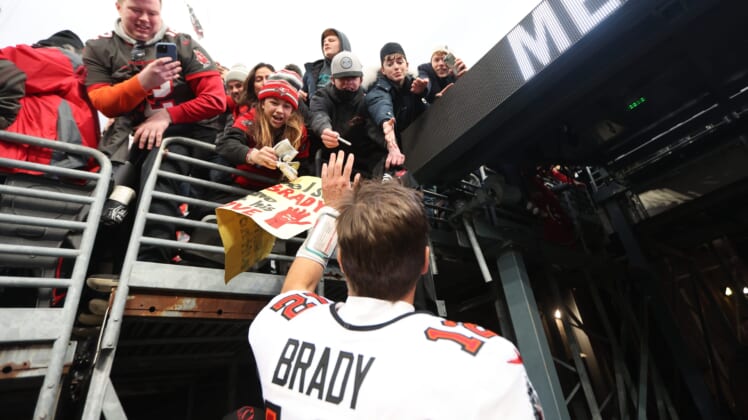 There are several superstars across the league in the NFL. Ranging from players such as Patrick Mahomes, Joe Burrow, Aaron Donald and more, every fanbase has someone to celebrate. Yet with all the fanfare throughout, no player is more popular than Tom Brady.

According to sales data released by the NFLPA, even in his 22nd year in the NFL, TB12 had the best-selling merchandise among all other football players during the 2021-22 season.

It’s highly likely his move from the New England Patriots to the Tampa Bay Buccaneers prompted more consumers to buy a new jersey representing his new team, likely spiking the numbers, but as the data shows, this isn’t the first, or second time Brady has been the NFL’s most popular player.

It’s the fifth time Brady’s outsold every other NFL player, which is a new record, and the second consecutive year he had the top-selling merchandise. They’ve been recording such data at the NFLPA as far back as 2014.

Keep in mind, this includes everything from jerseys, all types of clothing, trading cards and collectibles, photos, bobbleheads, just about anything someone would buy that represents Brady or any other NFL player.

Who else is in the top-10 of NFL merchandise sales?

Here’s the complete list of the top-10 of all NFL memorabilia sold during the 2021-22 season.