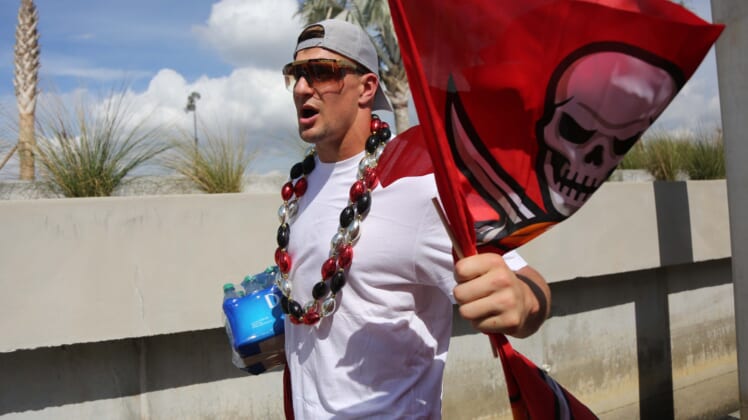 Tom Brady and Rob Gronkowski reunited this past season to help the Tampa Bay Buccaneers win Super Bowl LV. With the future Hall of Fame quarterback signing a new contract, the duo could be running it back for another shot at the Lombardi Trophy.

After announcing his retirement following the 2019 season, Gronk told the New England Patriots he was coming back and wanted to play with Brady in Tampa Bay. Almost immediately after, the legendary duo was reunited in a move that seemed to be months in the making.

The plan worked out, with Gronk scoring the first touchdown in Super Bowl LV and capping off a wild performance with another score. After celebrating their fourth Super Bowl win together, Brady’s seventh, Gronk is now thinking about his future. and where he will play in 2021.

NFL rumors: Rob Gronkowski expected to re-sign with the Buccaneers

According to ESPN’s Jeremy Fowler, Gronkowski is most likely staying in Tampa Bay. While the 6-foot-6 tight end will explore his options, with Fowler noting the Buffalo Bills as a potential landing spot, the expectation is a new deal with the Buccaneers.

A few weeks ago, bringing Gronkowski back would have been more challenging for the Bucs. Before the team could even begin to think about its secondary free agents, it needed to focus on Lavonte David, Chris Godwin and Shaquil Barrett. With limited cap space, bringing all three impact starters back would have been difficult. Fortunately, circumstances have changed.

David, who arguably should have been Super Bowl MVP, signed a two-year contract worth $25 million. Thanks to the deal containing voidable years, spreading out his signing bonus, it lowered his cap hit. As a result, Tampa Bay placed the $16 million franchise tag on Godwin and intends on signing him to a long-term deal.

Then, Brady gave the organization even more financial flexibility. Thanks to his new extension, the Buccaneers gained an additional $19 million in cap space. It’s more than enough to re-sign Barrett, with efforts underway, and allows them to start thinking about Gronk, Antonio Brown and Ndamukong Suh.

Given that Gronk has said he only wants to play for Brady, a return to Tampa Bay seems like a foregone conclusion. He might flirt with other teams, creating some leverage to drive his asking price up, but there’s only one perfect landing spot for him. One of the greatest tight ends in NFL history loves Florida, wants another ring and enjoys playing with his best friend. So, expect to see more Gronk spikes in Tampa Bay next season.