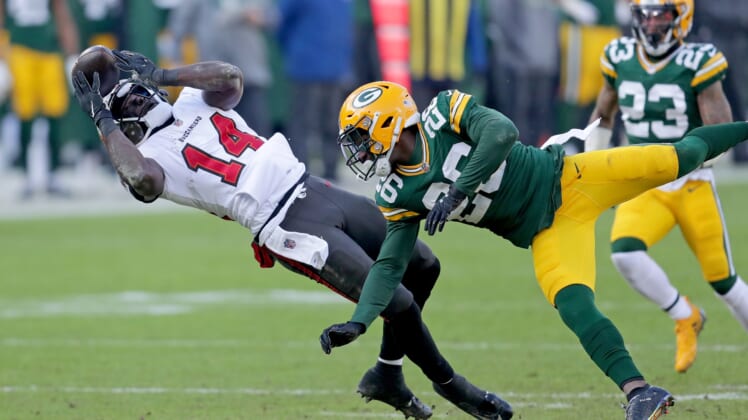 In no way does this mean Tampa Bay has given up hopes of signing Godwin to a contract extension to lower his 2021 cap number. At the very least, that’s what we’re hearing.

NFL Media’s Ian Rapoport noted on Tuesday that the tag will act as a “placeholder” until the Buccaneers and Godwin are able to come to terms on a long-term contract.

An extension would make sense for both parties. By virtue of handing Chris Godwin the franchise tag and signing linebacker Lavonte David to a new two-year contract, Tampa Bay finds itself $10.35 million over the cap. It also has core internal free agents such as Antonio Brown, Rob Gronkowski, Leonard Fournette and Ndamukong Suh to think about re-signing.

An impending Tom Brady contract extension will likely lower his cap number. However, there’s still a lot of work for general manager Jason Licht to do. Getting Godwin locked up would help a lot.

Read More: How an Odell Beckham Jr. trade to the Tampa Bay Buccaneers could work

Godwin, 25, has been stellar since Tampa Bay made him a third-round pick back in 2017. The Penn State product is averaging 70 receptions for 1,005 yards and eight touchdowns over the past three seasons. He’s still only 25 and has yet to hit his prime.

Any potential extension would likely come in at north of $18 million annually. Comparable contracts include Odell Beckham Jr. of the Cleveland Browns and Kansas City Chiefs star Tyreek Hill. In turn, the Buccaneers could back load massive cap hits, lowering Godwin’s 2021 number in the process.

Something to the tune of five years for $90 million with a $10 million cap hit for the 2021 season could make sense. After all, the Buccaneers’ Super Bowl window is wide open following last season’s shocking run to the title. They will sacrifice future cap health for continued short-term contention.