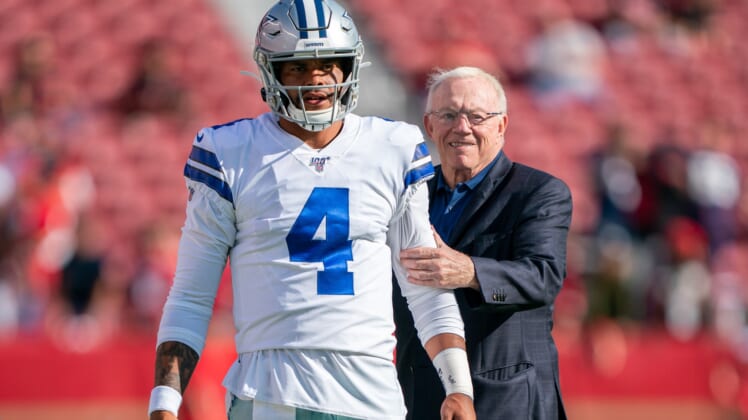 The NFL franchise tag deadline was Tuesday. However, the biggest story around the league during this early portion of the offseason was the Dallas Cowboys’ decision to sign Dak Prescott to a massive extension rather than place said tag on the quarterback. What does that mean for the NFL salary cap moving forward?

As for those who were actually handed the tag, there’s a storm brewing between star wide receiver Allen Robinson and his Chicago Bears. Could that lead to a blockbuster trade over the next week?

These are among the top takeaways from the NFL franchise tag deadline.

The Dallas Cowboys’ shocking decision to sign Prescott to a record-breaking four-year, $160 million contract on Monday tells us a few stories. First off, the $95 million in fully-guaranteed cash is the most in NFL history. Dallas is obviously content believing Prescot will recover from the serious lower-body injury he suffered five games into the 2020 season.

By technically not placing the NFL franchise tag on Prescott, the Cowboys save roughly $15 million against the 2021 salary cap. He’s now set to count a mere $22.2 million against said cap before the number increases to a whopping $44.2 million in 2022.

What does this mean? In the know more than any other owner in the NFL, Jerry Jones is signaling that a soon-to-be signed television contract will be an economic boon for the league moving forward. It’s no small thing given that the 2021 NFL salary cap is going to decrease due to the revenue downtick created by COVID-19. While it’s unlikely to impact this offseason, the economic health of the league seems to be just fine moving forward.

If he signs the tender, Robinson will earn a cool $17.88 million in 2021. However, there’s no telling whether the elite 27-year-old receiver will do that. By now, it’s well known that Robinson and the Bears have been ways apart in contract negotiations over the past year-plus. There’s even some NFL rumors out there suggesting Chicago’s decision to franchise Robinson could be under the guise of trading him.

What we do know is that Robinson has more than earned a lucrative long-term contract. Over the course of the past two seasons ,while catching passes from mediocre quarterbacks, Robinson has tallied a combined 200 receptions for 2,397 yards with 13 touchdowns. He’s one of the top pass-catchers in the NFL. Chicago is not valuing him at that clip. Perhaps, another team like the Miami Dolphins will on the trade market here soon.

One of the biggest surprises from Tuesday’s action was the Saints’ decision to hand this star safety the franchise tag. Williams, 24, has been a darn good cover safety during his four-year NFL career, recording 13 interceptions during that span. However, his $10.5 million cap hit for 2021 will cause a trickle-down effect in the Bayou.

New Orleans is now an estimated $55.15 million over the 2021 NFL salary cap. This is an indication that a slew of restructures, trades and releases will be on the horizon before the new league year opens up March 17. Cornerback Marson Lattimore and left tackle Terron Armstead are among those who could be restructured/extended. Veterans Kwon Alexander and Emmanuel Sanders will likely be released. Meanwhile, embattled wide receiver Michael Thomas could potentially be headed for the NFL trade block.

It came as a rather huge surprise. Lacking talent pretty much up and down the roster, the rebuilding Lions should have done everything possible to keep their No. 1 wide receiver. Instead, Detroit’s new general manager Brad Holmes opted to play chicken on Tuesday. Golladay, 27, will now likely leave for greener pastures once NFL free agency opens.

To be clear, it’s a questionable second major decision from Holmes after he traded Matthew Stafford for Jared Goff earlier in the offseason. Detroit is banking on Goff to return to earlier-career form. It now doesn’t have what would have been the quarterback’s top target moving forward. Currently $12.1 million under the cap, Detroit had avenues to fit Golladay’s $18.8 million NFL franchise tag tender in. Instead, it faces losing the team’s most-talented skill-position player. That’s just gross.

The Washington Football Team’s decision to slap this star guard with the franchise tag for a second consecutive year came as a major surprise. By doing this, Washington guarantees Scherff $33.1 million over a two-year span. That’s an average of $16.5 million per season, making Scherff the highest-paid guard in NFL history over a two-year span.

For the former No. 5 overall pick, it’s highly unlikely that he would have earned that per-year average on the NFL free agent market either last year or this year. He’s still only 29-years-old and will undoubtedly hit the market next March. If the four-time Pro Bowler continues to play at the level we’ve seen thus far in his career, that will lead to an absolutely huge long-term contract. Yeah, Scherff bamboozled Washington in a big way.