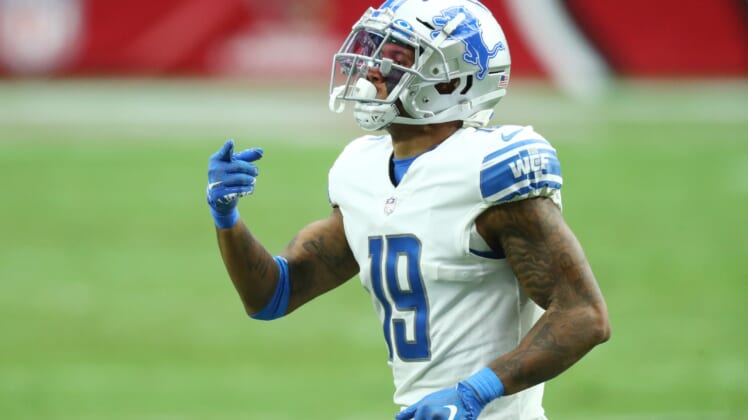 It’s not a surprise that the Miami Dolphins are being linked to top-end wide receivers on the NFL free agent market, Kenny Golladay included. However, we’re now starting to get more concrete information with the market set to open next week.

According to Adam Beasley of the Miami Herald, the Dolphins are going to make Golladay a priority once the free-agent negotiating window opens on March 15.

This comes on the heels of the Detroit Lions surprisingly opting against placing the franchise tag on Golladay prior to Tuesday’s deadline. Said move shocked the masses after other top-end impending NFL free agents were handed the franchise tag.

Kenny Golladay is a perfect fit for the Miami Dolphins

Unfortunately, he dealt with major injury issues this past season. The former third-round pick from Northern Illinois suited up in just five games for the Lions. That’s likely one of the primary reasons Detroit opted against placing the tag on the still-young pass-catcher.

As for the Dolphins’ interest in Kenny Golladay, it’s not really a surprise. NFL rumors have suggested that general manager Chris Grier will be targeting receivers once free agency opens. With Allen Robinson and Chris Godwin having been franchise tagged on Tuesday, Golladay joins JuJu Smith-Schuster as the top free agent at this position.

The Dolphins will return leading receiver DeVante Parker next season. Outside of that, there’s not a whole lot to write home about in South Beach. Jakeem Grant was the team’s second-leading pass-catcher from the wide receiver position last season. However, the smallish former Texas Tech star is limited to the slot.

In addition to Kenny Golladay, it’s being noted that the Dolphins are interested in former Tennessee Titans top-five pick Corey Davis. Again, that’s a clear indication what position the team is looking to target once the market opens.

As of right now, Miami finds itself $35.60 million under the projected 2021 NFL salary cap. The team will create more room once the Kyle Van Noy situation is settled. He’s set to come off the books, either via trade or release, with a cap savings of $9.78 million.

As for Kenny Golladay, he’s likely looking at north of $17 million annually on a long-term contract once the NFL free agent market opens up.