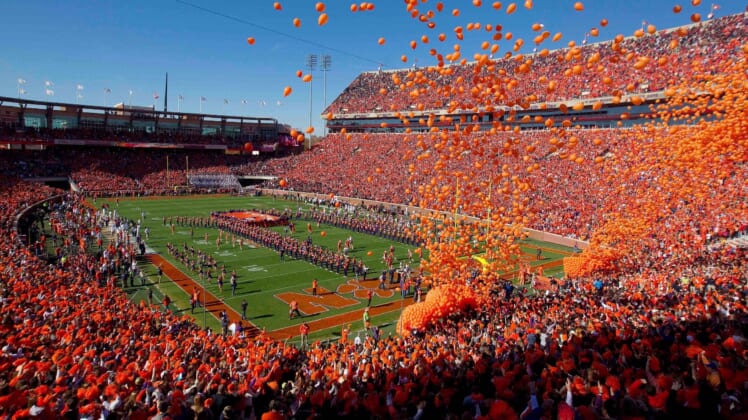 Nov 29, 2014; Clemson, SC, USA; A general view of the field prior to the game between the South Carolina Gamecocks and the Clemson Tigers at Clemson Memorial Stadium. Mandatory Credit: Joshua S. Kelly-USA TODAY Sports

Who says SEC football rules? According to a study by WalletHub.com, Clemson, S.C. is the top college football city in America.

The study took into account a number of metrics:

“In order to identify the best and worst cities for football fans, WalletHub’s analysts compared the 245 of the largest U.S. cities with at least one college or professional football team based on two key dimensions, ‘Teams & Performance’ and ‘Costs & Fan Engagement.'”

To see a more detailed explanation, read about the study’s methodology here.

Not surprisingly, Tuscaloosa, Ala., home of the Alabama Crimson Tide, was the No. 2-ranked college football city, with Michigan State’s East Lansing, Mich. coming in third, Princeton, N.J. coming in fourth and LSU’s Baton Rouge, La. rounding out the top five.

The study is full of surprises. However, on the NFL side, to nobody’s surprise Green Bay, Wis., home of the Green Bay Packers sits at the top of the list and is actually rated as the top football city in the USA.

Perhaps Clemson’s positioning as the top college football city in American is slightly influenced by the school’s recent success.

However, considering the fame of Death Valley (also known as Memorial Stadium) and the way head coach Dabo Swinney has raised the school into the national spotlight the past few years, perhaps we shouldn’t be too surprised that this ACC school outranked all the SEC powerhouses.