Beware NFL defenses, it appears that the Green Bay Packers are planning to employ an up-tempo offensive attack with Aaron Rodgers under center in 2014. Green Bay averaged about 67 plays per game last season, but it’s now looking at increasing that number to 75 plus.

That eight-play increase might not seem like a big deal in the grand scheme of things, but it does average out to about three more series of downs per outing and a minimum of 128 more plays over the course of the season.

Packers head coach Mike McCarthy had this to say about their offense in an interview last month (via ESPN).

We play pretty fast, but you always want to play faster,” McCarthy said during an interview near the end of the offseason program last month. “With a guy like Aaron, he plays faster than anybody I’ve ever been around. 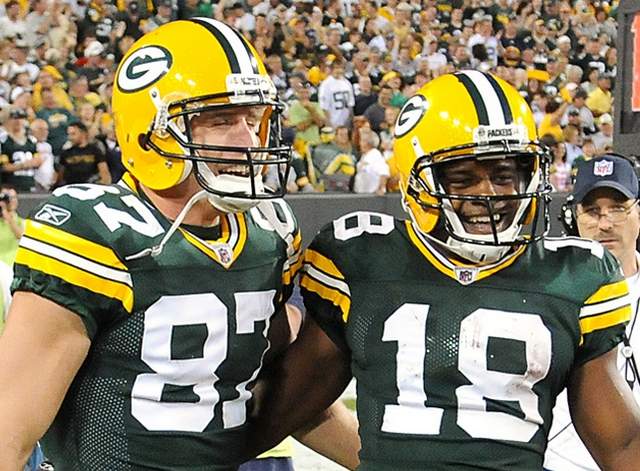 Courtesy of Packersnews.com: Nelson and Cobb have to be happy campers.

With a plethora of weapons at his disposal, why not give Rodgers an ability to run a higher-tempo offense? This means that the likes of Jordy Nelson, Randall Cobb, Jarrett Boykin and Davante Adams should get their fair share of touches in the passing game. In addition to that, we can expect second-year running back Eddie Lacy to EAT.

From an overall football standpoint, this is pure genius. Keep defenses on their heels while putting the ball in the hands of your all-world offense more than last season. From a fantasy football perspective, this is pure gold. Some had worried about how the targets will be doled out with so much talent at the wide receiver position. Well, it appears that Packers receivers will be more than fine.

One has to think that defensive coordinators in Minnesota, Detroit and Chicago are having a hard time sleeping prior to the start of training camp. It’s a nightmare to prepare for Green Bay’s offensive attack in the first place. With an expected up-tempo attack, the headaches for opposing NFC North defenses are expected to be real in 2014.