4 New York Giants who earned game balls in their 20-12 victory over the Chicago Bears, including Daniel Jones 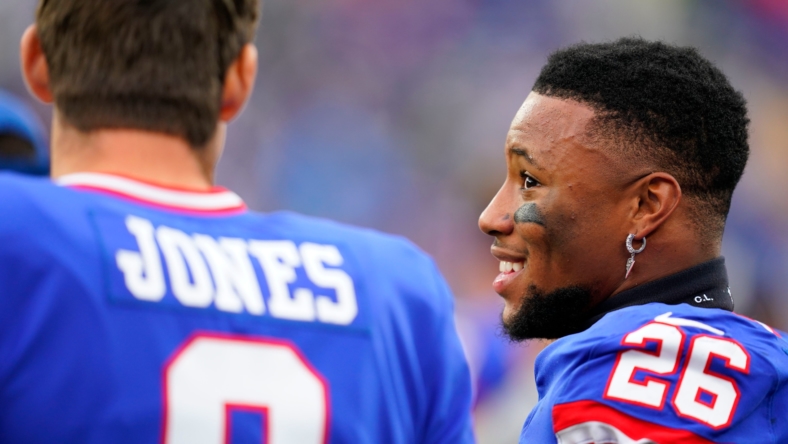 It was anything but a routine win for Big Blue, as due to injuries in the second half, Daniel Jones, Tyrod Taylor, and Saquon Barkley all saw time playing quarterback. But it shows how well head coach Brian Daboll and his coaching staff has this team prepared to handle any situation.

It was another gritty win for Big Blue, and four players stood out who were particularly worthy of earning game balls.

Barkley was once again clearly the best player on the field on Sunday. He gained 146 yards on the ground on 31 carries, and also hauled in two receptions for 16 yards. And of course, he played a few snaps in the 4th quarter as a wildcat quarterback.

It was the 14th 100-yard rushing performance of his career, tying him with Brandon Jacobs for fourth on the Giants’ all-time list. Through four games Barkley has 463 rushing yards and is averaging a career-high 5.5 yards per carry.

If he continues to perform at this level, you have to wonder if general manager Joe Schoen will engage in contract discussions with his superstar running back.

Jones earns a game ball, not because of what he did throwing the ball, as he completed eight out of 13 passes for 71 yards. But for what he did running the ball as he gained 68 yards on six rushing attempts and scored both of New York’s touchdowns on the day.

He re-entered the game once Taylor suffered a concussion and lined up at receiver for a few plays while Barkley was at wildcat before resuming his normal role under center.

Injuries have plagued Jones in his first three seasons in the league, but on Sunday, he was able to battle through his ankle injury and get back on the field.

Coming into the game, New York’s defense had just three sacks on the season. Against the Bears, the pass rush came to life as they sacked Justin Fields six times. Two of those sacks were by Dexter Lawrence.

It was perhaps the best game of Lawrence’s career as he also recorded five tackles and three quarterback hits. The Giants desperately need a push from their defensive line with Leonard Williams missing his second straight game. Lawrence provided that and was a huge reason why the Giants stand at 3-1.

Tae Crowder continues to prove his worth

Crowder made plays all over the field on Sunday as he had a game-high 11 tackles. He also added a sack and two quarterback hits on Justin Fields.

The Bears did have 149 rushing yards in the game, but thanks to Crowder, they prevented running back Khalil Herbert from ripping off long gains, holding him to 77 yards on 19 carries.

New York will need for all four players to once again have huge games on Sunday as they face their toughest test of the season in the (3-1) Green Bay Packers as the two teams will face one another in London.