Matthew Stafford vs Russell Wilson, part 1.0: Tale of the tape

Los Angeles Rams quarterback Matthew Stafford will take part in his first NFC West rivalry game against Russell Wilson and the Seattle Seahawks in what promises to be an epic “Thursday Night Football” matchup in the Pacific Northwest.

After spending the past dozen seasons with the downtrodden Detroit Lions, Stafford is finally on a contender. He has the Rams at 3-1 on the season with a win over the defending champion Tampa Bay Buccaneers mixed in.

As for Wilson, Seattle sits at a disappointing 2-2 on the campaign. The hope for this future Hall of Fame quarterback and Co. is that last week’s win over the San Francisco 49ers will be a stepping stone. Below, we preview this game from the perspective of these two Pro Bowl signal callers.

Despite Seattle’s questionable .500 start to the season, Wilson continues to play at an elite clip. He leads all NFL players with a 129.9 passer rating. The seven-time Pro Bowler also leads NFL quarterbacks in yards per attempt (9.6) and interception percentage.

This is just the continuation of what has been a dominating career for Wilson. Since the start of the 2018 season, this dude has tallied 121 total touchdowns against 25 interceptions. That’s just absurd.

Related: Find out where Russell Wilson and Matthew Stafford stand among NFL QBs

The average NFL fan just doesn’t realize how good this 33-year-old former No. 1 pick was during his time in Detroit. That’s primarily due to the fact that the Lions earned just three postseason appearances in his 12 seasons, losing in the wild card round each time.

It’s been a different story with the Rams. Stafford leads an offense that is averaging a robust 28.8 points per game. He ranks in the top 10 in completion percentage, passing yards, touchdowns and QB rating.

It was an obvious point of contention this past offseason. Amid overblown rumors of a potential divorce between Wilson and his Hawks, the quarterback took to the media to question the lack of talent on the offensive line in front of him.

“Like any player, you never want to get hit,” Wilson told reporters via Zoom on Tuesday. “That’s the reality of playing this position. Ask any quarterback who wants to play this game. I think that the reality is I’ve definitely been hit. I’ve been sacked almost 400 times, so we’ve got to get better.

Russell Wilson to reporters back in February.

Wilson, 32, has been the most-sacked quarterback in the NFL since joining the league back in 2012. It’s not really that close. In fact, he’s gone down 405 times during that span. For comparison’s sake, another all-time great in Tom Brady has been sacked 252 times during the same 10-year span. That’s just insane.

Despite this, Russell Wilson is finding a way to connect with wide receivers at an elite clip. That includes Tyler Lockett nabbing 20-of-25 targets (80% catch rate) with 333 yards and five touchdowns through four games.

This connection is going to be put to the test against Jalen Ramsey and Co. Thursday night in Seattle. The Rams have given up only four touchdown passes in as many games.

What a change of scenery means for Matthew Stafford

Only four times during his dozen seasons in Detroit did a Stafford-led Lions team start a season with a 3-1 record. Despite Los Angeles’ ugly Week 4 loss to the Arizona Cardinals, the team is in this position heading into Thursday.

Having a capable head coach, elite-level offensive line, great skill-position players and potentially dominant defense has made a world of different for Matthew Stafford. It’s all about these complementary pieces coming together in Southern California. 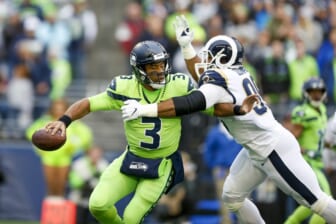 As for what we’ve seen from Mr. Stafford, he continues to make sweet music with stud pass-catcher Cooper Kupp. That includes converting on 30-of-46 targets for 431 yards and a league-leading five touchdowns. Right now, there’s only one receiver in the NFL who has been more productive than Kupp. That comes in the form of Deebo Samuel of the San Francisco 49ers.

This tells us a story of how a change of scenery and an improved supporting cast has helped change the trajectory of Stafford’s career.

There’s really no other way to go about it. This might very well be the best chance for Stafford to prove himself among the league’s elite. A nationally televised mid-week game against one of the top quarterbacks of his generation. His first rivalry matchup against Mr. Wilson. Continued contention for first place in the ultra competitive NFC West on the line.

We couldn’t ask for more. And in reality, whoever plays better between these two stud quarterbacks will likely lead his team to a victory.