These aren't the same old Cleveland Browns. If they can figure out a way to sign Jadeveon Clowney in free agency, it may well get them to Super Bowl LVI. 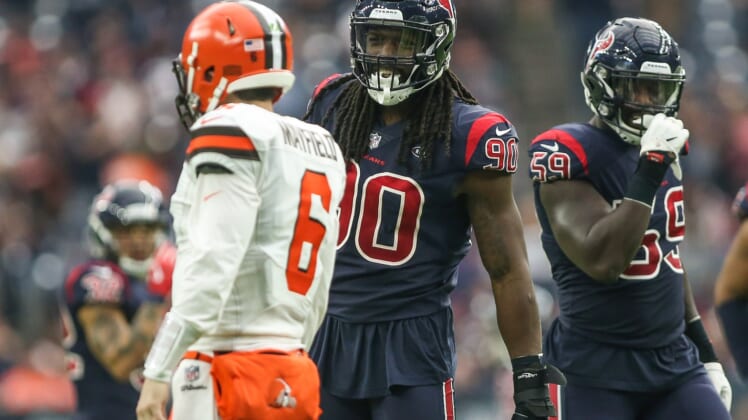 The Cleveland Browns have been proactive in upgrading their roster this offseason, particularly on defense, and Jadeveon Clowney would be the final piece to an overhauled unit that’d vault the team into legitimate Super Bowl contention.

With key young stars like quarterback Baker Mayfield, cornerback Denzel Ward and tailback Nick Chubb all still on their rookie contracts, the time is now for the Browns to push their chips all-in on 2021. That’s how Berry has attacked upgrades on the open market, and signing Clowney should be no different.

Because if Clowney comes to Cleveland, make no mistake, we’re looking at a legitimate Super Bowl LVI contender.

Browns general manager Andrew Berry acquired dynamic safety John Johnson III and slot cornerback Troy Hill, both of whom were part of the Los Angeles Rams’ No. 1 defense last season. Last year’s second-round pick Grant Delpit is expected to contribute in a big way in 2021, and Greedy Williams is expected to return from missing last year (like Delpit did) to start opposite Ward at outside cornerback.

In fact, concerns about the secondary should be mostly alleviated, yet the front seven is still a bit of a question mark, particularly the defensive front. Garrett is an obvious star, and Sheldon Richardson is still in place. Depth is seriously lacking, though, and we saw how the Tampa Bay Buccaneers’ dominant pass-rushing tandem of Shaquil Barrett and Jason Pierre-Paul sparked a rout in Super Bowl LV.

While Clowney has never really been a pass-rushing dynamo, he’s an absolute, undeniable force against the run. He’s also big and strong enough to slide inside on obvious passing downs, and could pull off some pretty impressive stunts with he and Garrett crashing the pocket next to each other.

Clowney would solve the defensive front problems Cleveland currently has, both as an effective No. 2 edge defender to pair with Garrett and as someone who can help stop the run and alleviate depth concerns in the trenches thanks to his uncommon versatility.

It’s no wonder the Browns went after Clowney last offseason in a lengthy, ultimately unfruitful pursuit. Chasing him again wouldn’t be necessary if Olivier Vernon hadn’t torn his Achilles in Week 17 this past season. Cleveland could’ve probably just brought him back for another year. However, that’s not how things played out.

Because of Clowney’s experience as a 3-4 outside linebacker and 4-3 defensive end, he’s much more functional in space than most players his size. That just opens up more possibilities as to how Browns defensive coordinator Joe Woods could deploy him.

The all-around skill set Clowney has means his impact doesn’t always show up in the box score. As a former No. 1 overall pick, everyone’s expected Clowney to pop off with, like, a 15-sack season. It’s just not going to happen. That’s what Garrett is there for, and his chances of producing at an historic rate will skyrocket if it’s Clowney, not McKinley, starting opposite him in 2021.

Clowney is more of a QB hurry specialist. Per Pro Football Focus, he’s averaged approximately 37 hurries in the four seasons prior to 2020, when he only played in eight games due to a torn meniscus. Getting that type of consistent pressure creates plenty of clean-up situations for Garrett. For context, Garrett had 36 QB hurries in 2020, per PFF, and had 13 sacks.

Thus, the amount of steady pressure Clowney creates as a pass-rusher isn’t half-bad for someone who’s considered a superior run defender.

Just the presence of a 6-foot-5, 255-pound athlete like Clowney on the gridiron is enough for opposing offenses to pause and wonder just what he’ll do on any given snap. Having to account for someone like him, with Garrett crashing off the edge, Johnson flying all over the field on the back end and Ward essentially locking down one half of the field would make Cleveland’s D pretty darn tough.

Since divisional games make up a good chunk of the schedule, it’s worth looking at that first. The AFC North isn’t going to be a cakewalk, but Clowney is the type of dynamic defender who can further impact the Browns’ already-favorable chances to dethrone the Pittsburgh Steelers.

Since the Cincinnati Bengals let their two best defensive players in William Jackson III and Carl Lawson walk in free agency and replaced them with dubious options, it’ll take a phenomenal draft to get enough protection in place for QB Joe Burrow for the team to have any hopes at climbing out of the division cellar. As it stands, Clowney and Garrett would have a field day against the Bengals twice next year.

Splitting meetings with the Baltimore Ravens would be passable, yet with the moves Cleveland has made, there’s reason to aspire to a sweep. Baltimore doesn’t have good personnel at receiver for signal-caller Lamar Jackson, and the Browns’ upgraded secondary is going to pose serious problems. Adding a run stopper like Clowney to help contain Jackson would be invaluable.

As for the Steelers, Ben Roethlisberger is on his last legs, and Cleveland’s additions of Johnson and Hill, combined with the return of Williams and Delpit from injury, should help the Browns match up better to Pittsburgh’s young, gifted receiving corps.

Considering they haven’t done much to address their dead-last rushing offense from a season ago, the Steelers would be in serious trouble against Cleveland with Clowney in the fold. The immobile Big Ben would likely be forced into a one-dimensional, pass-heavy attack, which resulted in a blowout loss against the Browns in the Wild Card Round.

As for outside the division, to have any chance on the road against the likes of Aaron Rodgers, Patrick Mahomes and Justin Herbert, this 2021 Cleveland team needs a legitimate stud like Clowney to help put pressure on them.

Thankfully, the Browns’ non-division home schedule is very favorable, when the opposing passers are players like Andy Dalton, Drew Lock, Jared Goff and whoever the Houston Texans trot out — Tyrod Taylor? Going that road sans Clowney is feasible, yet how much more difficult would those players have making headway if Clowney were in a Browns uniform?

How often do you get to have two No. 1 overall picks on the same team starting at defensive end? It’s pretty rare. Cleveland should make it happen at least for one season for a multitude of reasons, because it could make or break the Dawg Pound’s chances at hoisting a Lombardi Trophy.