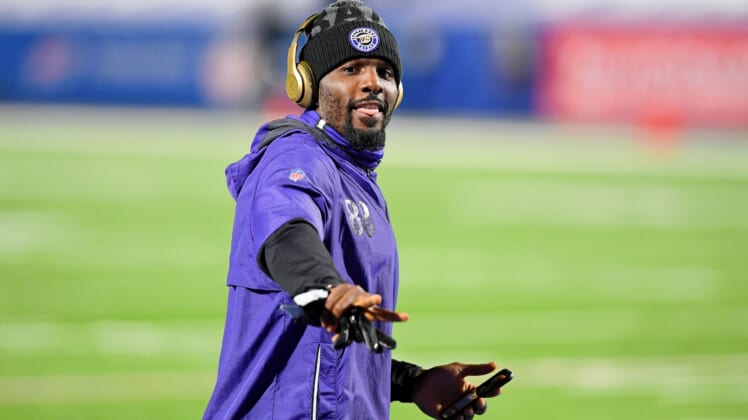 Dez Bryant made his return to the NFL in 2020 with the Baltimore Ravens, overcoming COVID-19 to score his first touchdown since 2017. Now a free agent, the former three-time Pro Bowl selection is thinking about a return to the Dallas Cowboys.

The path just to get to this point has been grueling for Bryant. After being cut by the Cowboys following the 2017 season, he couldn’t find a team until November 2018. Bryant then signed with the New Orleans Saints, hoping to compete for a Super Bowl and start alongside Michael Thomas.

Days after signing with the team, he tore his Achilles in his first practice. The devastating injury sidelined him for the remainder of the season and the rehab process kept him out in 2019. But Bryant wanted to return to the NFL, eventually signing with the Ravens in October.

It proved to be another challenging year for the former NFL star. Now that it’s behind him, Bryant already knows where he wants to play next season.

As Bryant prepares for the 2021 season, he recently spoke to TMZ Sports about his plans for the fall. While the 32-year-old is keeping an open mind to potential landing spots, he does seem to have a preferred destination.

Related:  Dez Bryant says Baltimore ‘wasn’t the place for me’

Bryant seems to be taking notice of the Arizona Cardinals. The front office showed a win-now approach by signing J.J. Watt, a big move made to help compete for a Super Bowl. Just as importantly, though, he wants to team up with Arizona’s stars on offense.

Dez Bryant on desire to play for Arizona Cardinals, via TMZ Sports.

It’s not the only team Bryant is interested in suiting up for next season. After seeing his former team make Dak Prescott one of the highest-paid quarterbacks in NFL history, a return to the Dallas Cowboys is also appealing. That is, if the organization welcomes him back.

Bryant wanted to return to Dallas last season. He caught passes from Prescott and trained with Ezekiel Elliott, creating plays like the trio used to years prior. The Cowboys’ star quarterback even advocated for the team to sign Bryant.

At one point, Jerry Jones indicated he was open to a reunion. However, the team never invited Bryant for a tryout and he later found a spot with the Ravens. He played in six games, nearly retiring after testing positive for COVID-19, but later returned to action.

Right now, there isn’t a ton of incentive for Dallas to bring Bryant back. The team is set at receiver with Amari Cooper, Michael Gallup and CeeDee Lamb. Plus, the constraints of the NFL salary cap make this even more unlikely. But crazy things happen every NFL offseason.