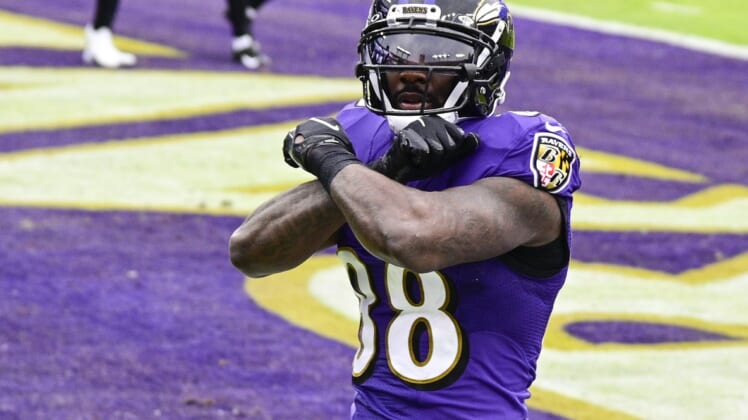 It was back on Dec. 10 of 2017 that Dez Bryant caught a touchdown pass for his then Dallas Cowboys against the New York Giants in a 30-10 win. This represented Bryant’s 73rd career touchdown catch as a member of America’s Team.

No one thought that it would take Dez Bryant three years and 10 days to score another touchdown on an NFL field. The former Pro Bowler’s return from an Achilles injury he suffered back in 2018 had been sidetracked by numerous issues, including a lack of interest in his services.

That changed earlier this year when Dez Bryant signed on to the Baltimore Ravens’ practice squad. Now, over three years since his last touchdown, Bryant hit the end zone again on Sunday against the hapless Jacksonville Jaguars.

It was just a couple weeks ago that the 32-year-old Bryant took to social media ahead of a game against the Dallas Cowboys to declare that he was done for the season after testing positive for COVID-19.

That obviously didn’t come to fruition, as Bryant’s situation with COVID-19 painted a broader picture of issues playing football during the pandemic. But we digress. It’s been a long road back for Bryant.