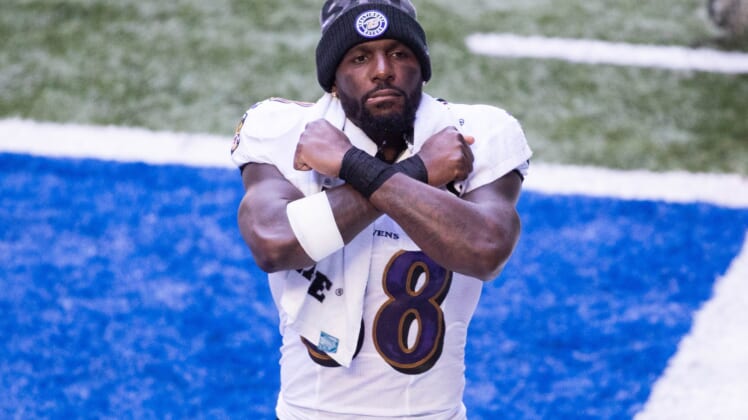 The Baltimore Ravens’ Week 13 game against the Dallas Cowboys was originally slated for last Thursday. It was a chance for Dez Bryant to go up against his former team.

Unfortunately, the game was postponed until Tuesday evening after an outbreak of COVID-19 within the Ravens’ organization.

Mere minutes before said game, Bryant took to social media to announce that authorities had pulled him from warmups to be tested. Said test apparently came back positive for COVID-19.

Bryant has now officially been ruled out for the game due to an “illness.” Wonder what that could be.

Dez Bryant then took to social media a bit later announcing that he had decided to call it quits for the remainder of the season (and potentially his career).

This really is some next-level stuff right here.

At this point in the NFL season, we’re not even sure what to do with this. Was Dez Bryant quarantined from the rest of the team ahead of Tuesday’s game against his former squad? If not, how can we be sure that multiple Ravens players are not taking to the field against the Cowboys while carrying COVID-19?

The NFL protocols as it relates to this pandemic have been placed in question at a near never-ending loop. Most recently, executives around the league have brought up the competitive balance issues that have come up regarding said policy.

It’s also important to note that the rapid test Dez Bryant took ahead of Tuesday’s game has a history of coming back with false-positives. It happened with the San Francisco 49ers ahead of their Week 9 loss to the Green Bay Packers. Despite this, multiple star players were forced to sit out the game.

The NFL needs to find a better policy than this. Simply put, the status quo is not working. It could have wide-ranging ramifications for the remainder of the regular season and into the playoffs. The Dez Bryant situation is just the latest example.