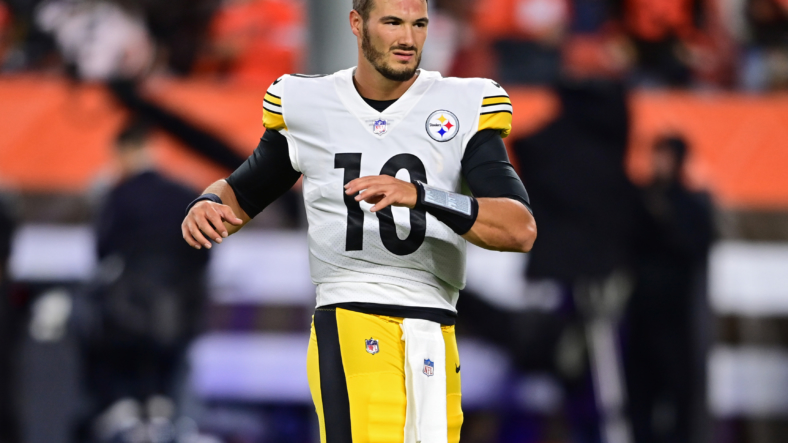 Fresh off an ugly loss to the New York Jets, it was time for the Cleveland Browns to rebound. The Pittsburgh Steelers also needed to salvage the early season after losing to an average New England Patriots team last week.

That was the backdrop as these two heated division rivals did battle on “Thursday Night Football” to open Week 3 of the NFL season.

In the end, Cleveland held court at home by virtue of improved play by the team’s offense. On the other side, Mitch Trubisky and the Steelers’ offense went quiet in the second half en route to an ugly 29-17 loss. Here, we provide you with five winners and losers from Cleveland’s 12-point victory over Pittsburgh Thursday night.

We focused on Cleveland’s other wide receivers behind Cooper heading into this one. Primarily, that’s because the Steelers were going to focus on Jacoby Brissett’s top target in the passing game. Unfortunately for the Steelers, their secondary didn’t have an answer for Cooper.

The former Pro Bowler caught 7-of-11 targets for 101 yards and a touchdown in the win. This is just a continuation of stellar play from Cooper early in his first season with the Browns. Through three games, Cooper is on pace to catch 108 balls for 1,241 yards. Not too shabby for someone the Dallas Cowboys sold off in a cost-cutting move.

Loser: Mitch Trubisky struggles for the Pittsburgh Steelers once again

A lot was made of Trubisky and whether he would retain Pittsburgh’s starting job if he struggled again on Thursday night. While head coach Mike Tomlin is attempting to be patient, the quarterback’s second-half struggles might expedite a switch to rookie Kenny Pickett.

Those numbers don’t seem too bad. That’s until we realize Trubisky actually completed eight of his first nine passes. He finished by completing 12-of-23 attempts as Pittsbuurgh put up all of three points the second half. That’s just not going to cut it.

Winner: David Njokua has career-best night for the Cleveland Browns

The Cleveland Browns received a ton of flack for signing Njoku to a four-year, $54.75 million contract extension this past offseason. After all, the former first-round pick had racked up all of 148 catches in his first five seasons. Heading into Week 3, Njoku had caught four passes for 39 yards in two games.

Something changed big time on Thursday evening. Njoku looked like that first-round talent he was at Miami. He hauled in 9-of-10 targets for 89 yards and a touchdown. This could be no small thing moving forward for the Browns, especially considering the wide receiver issues behind Amari Cooper.

Pittsburgh is relying on this former San Francisco 49ers mid-round pick to be its top cornerback this season. Back in 2021, Witherspoon yielded a mere 37.8% completion and 35.1 QB rating when targeted. He didn’t look like the same player in the first two weeks (110.2 QB rating allowed).

Well, things did not go swimmingly with Witherspoon facing off against Cooper Thursday night. Prior to going down with a hamstring injury, he was burnt to the extent of six receptions and a touchdown. Talk about adding insult to injury.

Winner: Nick Chubb continues to dominate for the Cleveland Browns

With Deshaun Watson suspended through Week 12, we knew that Cleveland’s rushing attack woud have to step up. Primarily, the onus would be on Chubb to do his thing. Boy, did he come to play against the Steelers on Thursday.

Through three weeks, Chubb is on pace for nearly 2,000 rushing yards. He’s scored four touchdowns following a three-score performance in Week 2. Yeah, we have an early candidate for the NFL Offensive Player of the Year award.