The Chicago Bears have an enviable situation: A new franchise quarterback in Justin Fields, an attractive big market, an iconic NFL brand and enough talent to win a Super Bowl if the Ohio State signal-caller pans out.

Just when it looked like Chicago might roll with a QB depth chart led by Andy Dalton and Nick Foles in 2021, general manager Ryan Pace moved up from 20th to 11th in the 2021 NFL Draft to select Fields.

It was a widely praised move by a GM who appeared to be on the hot seat after missing out on a potential Russell Wilson trade. Pace also passed on Patrick Mahomes in favor of Mitchell Trubisky once upon a time.

Let’s look at what the Bears need to do to maximize their potential championship window while Fields is still on his cheap rookie contract. 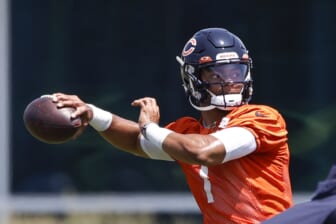 The fully-guaranteed deal Fields signed included a signing bonus of just over $11 million. Here’s what matters most, though: Going into next season, when he’s certain to be the starter, Fields will have only the 30th-highest cap hit among quarterbacks, per Spotrac.

Clearly, there’s a belief in Chicago that Fields can be the man to finally stabilize a quarterback position that’s experienced continuous turnover for decades. Fields is the most talented passer the Bears have ever had from a dual-threat skill set standpoint, too.

So, how can Chicago make the absolute most of the golden years — applied quite opposite of their traditional meaning in this context — in which Fields won’t eat up so much of its salary cap?

Bears head coach Matt Nagy has said there’s “no chance” Fields starts Week 1 as a rookie. That’s fine and all, but if Fields has a masterful grasp of the offense, proves the game isn’t too big for him and just looks head and shoulders above the competition during the preseason, the pressure will be on for Fields to be under center.

If Chicago’s ownership cleared the decision to draft Fields, it probably means Nagy and Pace are on a longer leash than it appeared they were following the 2020 season. That means there’s some leeway allowed for Fields while he goes through inevitable NFL growing pains.

The best way to learn is by live game action, though. Fields is such a superior athlete to Dalton and can make plays with his legs, outside the structure of the offense, that can mask some of his deficiencies early on. He’s extremely accurate and has shown the ability to make full-field reads even in college. 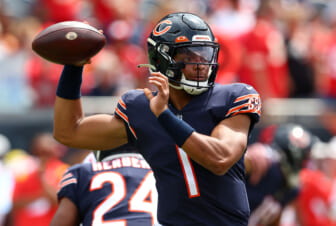 Every situation is different around the NFL. There’s always the danger of messing a young QB up by throwing him in too early. However, Fields seems equipped to handle the scrutiny, and shouldn’t have to wait long to make his official NFL debut.

Fields has such a different skill set to Dalton that it’s going to take some adjusting for the offensive line in front of him and receivers to keep themselves alive on scramble drills. There’s little value in sitting Fields at all, much less an entire year.

With Aaron Rodgers‘ future uncertain in Green Bay, the Detroit Lions rebuilding and the Kirk Cousins-led Minnesota Vikings having a clear ceiling, this is a golden opportunity for the Bears to take over in the NFC North. All their division games are winnable, and playing Fields in them should only help him in the long term.

Be open to potentially shaking up the coaching staff

This ties in to the points made above. Nagy seems like one of those coaches who’s a little stubborn and struggles to adapt. Sure, he’ll draw up flashy trick plays and show off his innovative schematic thinking on offense. On the other hand, Nagy once ran the ball only seven times in a game in 2019 with Trubisky as his quarterback.

To his credit, Nagy admitted defeat to some degree when he delegated play-calling duties to Bill Lazor in 2020.

Here’s where things could go south for Nagy in a hurry: If Fields and Dalton both struggle, which is admittedly possible, the coach’s reputation as an offensive genius will quickly decline.

Trubisky wasn’t drafted second overall for lacking talent. Foles is a former Super Bowl MVP who’s been admittedly inconsistent throughout his career, yet he had a familiarity with Nagy’s offense before arriving in Chicago and still underperformed.

Oh, and beyond Nagy, the Bears are breaking in an unproven defensive coordinator in Sean Desai. If the defense doesn’t jell in 2021, Chicago shouldn’t hesitate to find a superior replacement at coordinator. That may mean Nagy is shown the door as well.

Nagy returning after one more middling season would be a worst-case scenario. Pace probably feels some degree of loyalty to him, yet the NFL is a year-to-year league nowadays. The annual standard, especially with a 17-game schedule, should be double-digit wins. Any less than that in the next two years, and Nagy should be gone.

The Cleveland Browns have been Exhibit A of dysfunction and instability, yet despite putting their young field general Baker Mayfield through lots of coaching turnover early on, they eventually found reigning Coach of the Year Kevin Stefanski, and now their future looks extremely bright.

No need for Chicago to stick with mediocrity if that continues to be the result with Nagy at the helm.

Extend Allen Robinson to give Justin Fields a long-term No. 1 wideout

With 200 receptions over the last two years, Allen Robinson is playing under the franchise tag. he wasn’t willing to commit to a long-term deal this offseason because of the Bears’ uncertain, perpetually underwhelming quarterback depth chart.

Now that Fields is in the fold, as long as he lives up to his pre-draft billing, Robinson should be all about staying in the Windy City.

Robinson has never had a QB like Fields in his career. The star receiver began with the Jacksonville Jaguars, and well, life with Blake Bortles wasn’t great.

Still only 28 entering the 2021 season, Robinson has multiple prime years left. Chicago will have enough room to pay Robinson top dollar before Fields’ hopeful, eventual big payday. It’s imperative to do that, because Robinson, regardless of how bad the cast is around him, finds a way to produce huge numbers.

With Fields on a rookie contract, every season and offseason, the Bears should be relentless and aggressive until they deliver a Lombardi Trophy to their fans.

The sooner Chicago lifts the most coveted pro football hardware, the quicker Fields will get paid, and the easier it’ll be to conceive of how to build around him, on a more team-friendly deal.

When you have Fields on such a cheap deal and superstars like Robinson, pass-rusher Khalil Mack and multiple other cornerstones on defense, the time to win is now. Salary cap shouldn’t be a massive concern for at least a few years. That’s what the luxury of Fields affords the Bears.

Obviously, Robert Quinn hasn’t played up to his gaudy contract thus far. Quinn should be a post-June 1 cap casualty in 2022, even if it hurts Pace to admit he was wrong about that particular move.

Chicago must be willing to pivot priorities whenever necessary. No more waiting it out with ill-fated players like Trubisky. No lackluster efforts to load up the offense with middling skill position talent outside of Robinson.

The bold move to trade up for Fields is a sign that this is a new Bears era. They can’t afford to be conservative, and free agents will want to play for in Chicago as long as Fields is who the Bears drafted him to be.

Whether it means spending more than is advised on the open market or continuing to trade up in the draft for higher-caliber players, this isn’t the time for Chicago to settle for ordinary offseasons. Every one should aim to be extraordinary.

Basically, the bottom line is to play Fields early to expedite his development since he’s the long-term option and Dalton hasn’t proven to be much more than an average NFL starter. That’ll help Fields acclimate to the NFL sooner, and given the low standard the Bears have had on offense in recent years, Fields should be a big, immediate upgrade.

Locking up Robinson beyond 2021 is huge, too, because while Darnell Mooney has shown promise, the Bears don’t have many bankable receivers Fields can count on. If he can target someone like Robinson who’s pretty much always open, it’ll increase Fields’ margin for error and likely lead to more off-schedule explosive plays.

The final factor to consider is the assertion that every year is different in the NFL. Look at how conservative the Packers have been in the Rodgers era. Now he wants out, because he knows Green Bay isn’t doing enough to maximize its championship window.

Chicago has the chance to be the complete opposite of the rival Packers in the best way. If the Bears build a better team to begin Fields’ tenure, it’ll just show how out-of-touch and foolish Green Bay has been in its acquisition and handling of 2020 first-round QB Jordan Love.

Absent much else intimidating competition in the NFC North, Chicago has the leverage to ascend to the divisional throne and host playoff games for the next five years.

The Bears are already all-in on Fields just with what it took to draft him. It’s time for them to act that way and kick off a potential dynasty.