Biggest Names Sent Packing in First Round of NFL Cuts

NFL teams had to trim their rosters from 90 to 75 this week. While the first wave of cuts don’t normally include a ton of big names, there were some notables that were sent packing. We can expect bigger names to get their walking papers over the weekend when rosters are trimmed to 53, but here are some of the players involved in the first set of moves in preparation for the NFL regular season. 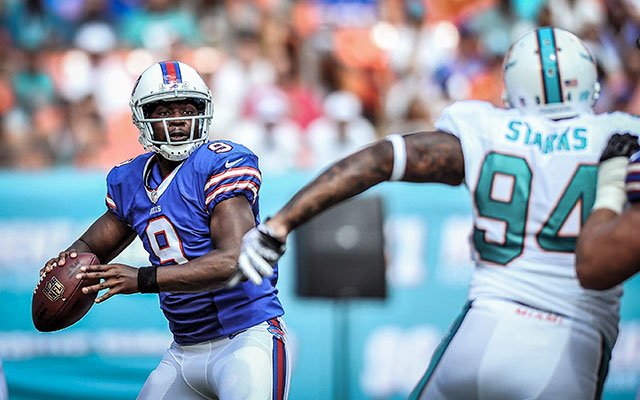 Courtesy of CBS Sports: Lewis was a surprise cut in Buffalo.

Thaddeus Lewis, Quarterback, Buffalo Bills: Lewis was the odds-on favorite to earn Buffalo’s primary backup quarterback job heading into the preseason, but he struggled big time in limited action, completing just over 50 percent of his passes. Lewis started five games for the Bills last season. He threw for 1,092 yards with four touchdowns compared to three interceptions during the year. The former Duke standout made his first NFL start as a member of the Cleveland Browns in 2012. He should get some looks around the league heading into the season.

Brady Quinn, Quarterback, Miami Dolphins: I highly doubt giving up a television analyst job to play practice fodder for the Dolphins made a ton of sense for Quinn, who has likely played his last snap in the NFL. The former first-round pick out of Notre Dame has thrown 12 touchdowns compared to 17 interceptions in 20 career NFL starts over seven seasons.

Winston Justice, Offensive Tackle, Denver Broncos: Yet another draft bust, Justice started a combined 29 games for the Philadelphia Eagles in 2009 and 2010. He was traded to the Indianapolis Colts prior to the 2012 season and started 12 games for Andrew Luck and Co. The former USC standout re-signed with Denver back in March, but wasn’t able to make it past the first round of cuts. Justice played 47 snaps this preseason and was among the worst offensive linemen in the NFL, at least according to Pro Football Focus.

Ramses Barden, Wide Receiver, Jacksonville Jaguars: Remember when you were all jumping all over Barden as a waiver-wire addition to your fantasy teams after he put up nine receptions for 138 yards and a score in a single game as a member of the New York Giants back in 2012? Well, that one game represents one third of Barden’s career reception total. He was released by the Jaguars this week after putting up just one catch on three targets this preseason.

Juron Criner, Wide Receiver, Oakland Raiders: Criner, a fifth-round pick in 2012, recorded 16 receptions as a rookie that season. It’s been a whole heck of a lot of nothing ever since. The Arizona product played in just one game and recorded three receptions last season. Criner played just 32 snaps and recorded two receptions this preseason prior to being released.

Tiquan Underwood, Wide Receiver, Carolina Panthers: When Carolina picked up Underwood this preseason, it was expected that he’d be a lock to make the 53-man roster. After all, the Panthers had lost a ton of veteran receivers and needed to add some other options for depth reasons. Unfortunately for both Underwood and the team, he didn’t do much of anything this preseason. After putting up a combined 865 receiving yards for the Tampa Bay Buccaneers over the past two seasons, the former seventh-round pick tallied just one catch for five yards in three preseason outings this summer.

Jacoby Ford, Wide Receiver, New York Jets: In yet another surprising move, Ford was released despite the fact that many considered him the favorite to win the Jets punt return duties. The smallish Clemson product, who was selected by the Oakland Raiders in the fourth round of the 2010 draft, has seen all of his major receiving numbers decrease in the last three years. Criner was released after playing the third-most snaps of any Jets receiver in the preseason. 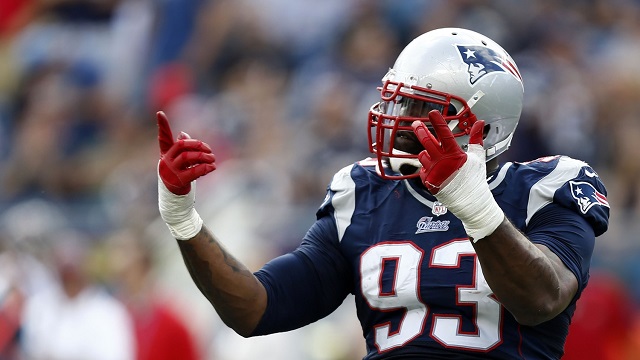 Courtesy of Rant Sports: Kelly will catch on with another team.

Tommy Kelly, Defensive Tackle, New England Patriots: It wasn’t too long ago that Kelly was considered one of the most underrated interior defensive linemen in the NFL. He recorded a combined 14.5 sacks for the Oakland Raiders in 2010 and 2011. After taking a step back in 2012, Kelly became a victim of Reggie McKenzie’s house cleaning last offseason. He caught on with the Patriots and recorded 2.5 sacks in five starts last year prior to suffering a season-ending injury. The 33-year-old defender played well this presason prior to being released and will catch on with another team.

Will Smith, Defensive End, New England Patriots: It’s rather obvious that New England doesn’t mind cutting veterans who have performed at a high level in the past. Smith, a former Pro Bowler for the New Orleans Saints, missed the entire 2013 campaign due to injury. However, he did rack up a ridiculous 67.5 sacks in his first nine years with the team. Smith struggled big time in extended action this preseason, so it’s no surprised the Patriots sent him packing.

Victor Butler, Linebacker, New Orleans Saints: One year after signing a two-year contract with the Saints, Butler’s career with the team came to an end prematurely earlier this week. Butler missed the entire 2013 season with a torn ACL and was sidelined for the first three weeks of the preseason with an ankle injury. Considering the flashes that Butler showed earlier in his career with the Dallas Cowboys, this wasn’t an easy move for head coach Sean Payton and Co.

James Anderson, Linebacker, New England Patriots: Anderson started 59 games for the Carolina Panthers and Chicago Bears over the past four seasons. While he isn’t much more than an average starting strong-side linebacker, the former third-round pick from Virginia Tech figured to play a role in the Patriots’ defense this year. Not so fast. Anderson was released earlier this week after playing in 56 snaps over the Patriots first three preseason games. According to Pro Football Focus, Anderson allowed five completions in as many passes thrown in his direction prior to the release. That likely didn’t sit well with head coach Bill Belichick. 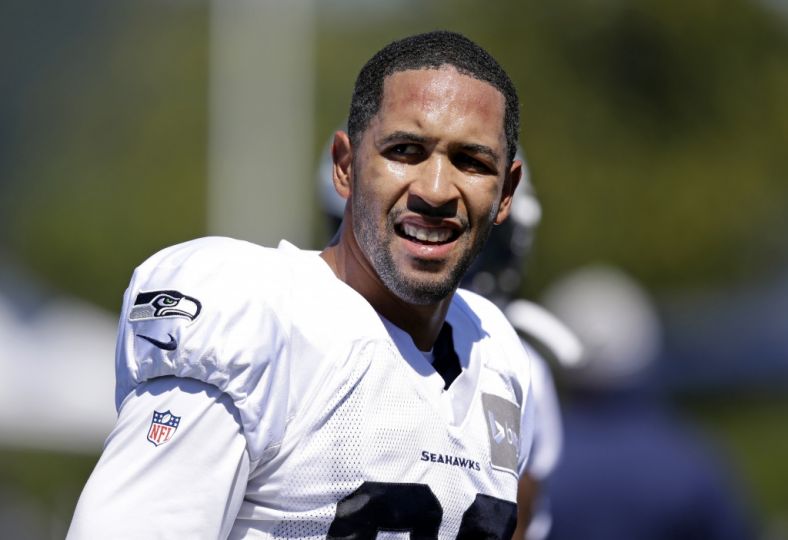 Sadly, injuries may have gotten the best of Thomas.

Terrell Thomas, Cornerback, Seattle Seahawks: Just a couple short weeks after Seattle signed Thomas off the street, he’s back looking for a job. Once a promising cornerback for the New York Giants, Thomas missed the 2011 and 2012 seasons with torn ACLs. He did come back to start seven games for the Giants last year, but simply wasn’t the same player. Thomas saw limited action for Seattle this preseason and was a complete disaster on the field.

Isaiah Frey, Cornerback, Chicago Bears: Frey, a sixth-round pick out of Nevada back in 2012, started six games for the Bears last season. Despite recording 47 tackles, it became obvious he wasn’t a starter-caliber defensive back in the NFL. When Chicago exhausted its first-round pick this past May on Kyle Fuller, it became apparent Frey didn’t have a place in the roster.

Mike Harris, Cornerback, Jacksonville Jaguars: Count me as one of the guys who loved Harris coming out of Florida State. The 2012 sixth-round pick started eight games in two seasons with Jacksonville prior to being released this week. He became a victim of the numbers game, as a ton of other Jaguars’ defensive backs were playing at a higher level during the preseason.

Adrian Wilson, Safety, Chicago Bears: Wilson had himself a great NFL career, but it’s readily apparent that the five-time Pro Bowler is done. After catching on with Chicago late this summer, Wilson saw more action than any Bears safety during the preseason. But it wasn’t enough for him to make it past the first round of cuts. Considering Chicago’s issues at safety, the fact that Wilson couldn’t make its 53-man roster is telling.