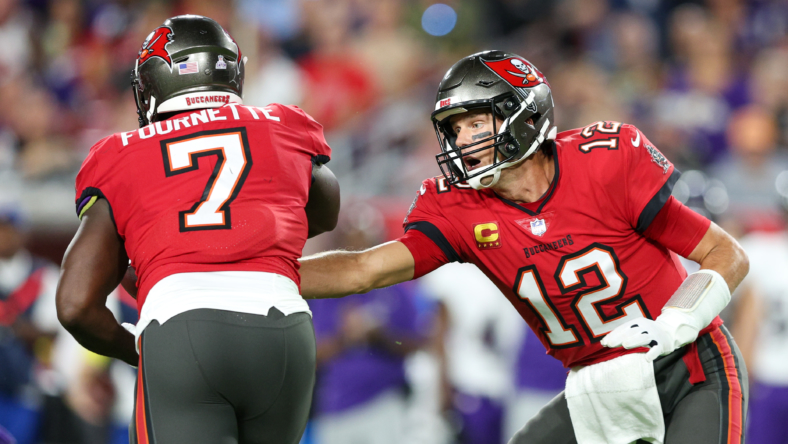 It didn’t start out swimmingly for Lamar Jackson and the Baltimore Ravens on the road against the Tampa Bay Buccaneers Thursday evening.

Baltimore found itself down 10-3 at the half with Jackson throwing an eye-opening 30 passes during that span. After scoring just three points in last week’s brutal loss to the Carolina Panthers, Tampa Bay netted 10 in the first quarter alone.

From pretty much that point on, it was all Ravens. They won by the score of 27-22, sending the Buccaneers to their third consecutive loss and an ugly 3-5 record on the season. For Brady, this represents the first time in two decades that he has lost three consecutive games. This also represents the worst eight-game start to his career.

Below, we look at five winners and losers from Baltimore’s five-point victory over the free-falling Buccaneers.

Winner: Justin Houston continues to make an impact for the Baltimore Ravens

While not necessarily as long in the tooth as Brady, Houston has been doing his thing since all the way back in 2011. That includes Houston having racked up 106 sacks throughout his career, good enough to rank 42nd in NFL history. Even at the advanced age of 33, Houston entered Thursday night’s game having recorded four sacks in as many games.

During a two-play sequence in the second quarter, Houston added two more sacks to his total — getting to Brady on consecutive plays to snuff out a potential Buccaneers scoring drive. Given the injuries Baltimore has dealt with this season, getting solid production from Houston can’t go unnoticed.

Brady entered Thursday’s game on pace to match his total for pass attempts from a season ago with 719. In fact, a few more passes per game would break the single-season NFL record. That’s not an ideal scenario for a 45-year-old signal caller.

One of the primary reasons for this is Tampa Bay’s struggles running the ball. It ranked dead last in rushing offense heading into Week 8. Nothing we saw from Fournette and Co. on Thursday changed this dynamic.

The former first-round pick gained all of 24 yards on nine attempts, struggling to find holes and having a ton of issues with vision. This represents Fournette’s second consecutive disastrous outing after he put up 19 yards on eight attempts against the Panthers last week. That’s just not going to cut it.

Star Ravens tight end Mark Andrews gave it a go in this one. The Pro Bowler was questionable heading in due to a knee injury. He didn’t even last a full half before being sent to the locker room with a shoulder issue.

Pretty much one of the most-important skill-position players in the game, the loss of Andrews would seemingly impact Jackson big time. Instead, Likely came to play big time for the Baltimore Ravens.

Including that touchdown, this rookie fourth-round pick from Coastal Carolina caught 6-of-7 targets for 77 yards — providing Jackson with a consistent target in the process. A talented pass-catcher, Likely starred during the preseason. He was given his first real shot of the regular year Thursday evening, and dominated. It’s going to be interesting to check out this dynamic moving forward on the season.

Loser: Tom Brady just doesn’t have it any more

A two-play sequence with Tampa Bay looking to score a touchdown in the fourth quarter comes to mind here. Brady had a wide open Kyle Rudolph in the end zone and threw the ball about as erratically as we’ve ever seen. On the very next play, he was lucky not to be intercepted by Marcus Peters on a pass intended for Mike Evans.

Two plays don’t define a player of Brady’s ilk. At issue here is the fact that he has continued to struggle throughout the season. The Buccaneers had scored all of two touchdowns in their previous 37 possessions before a garbage-time touchdown. For his part, Brady was a shell of his former self against a Baltimore defense that has allowed big plays this season.

To add insult to injury, Brady now holds the NFL record for sacks taken with 555, surpassing Ben Roethlisberger in the process. At this point, we’re just not sure where Brady and the Tampa Bay Buccaneers go from here. We just hope he doesn’t hang on past the 2022 season. No one wants to see that.

Last week’s ugly win over the Cleveland Browns saw Jackson complete just 9-of-16 passes for 120 yards while being sacked three times. He just didn’t look like the NFL MVP candidate we saw earlier in the season.

That was not the case against Tampa Bay on Thursday night. Jackson completed 27-of-38 passes for 238 yards with two touchdowns and zero interceptions. He also added 43 rushing yards on nine attempts.

What makes this performance so awesome is the fact that he was playing primarily with backups. Running back Gus Edwards, left tackle Ronnie Stanley and wide receiver Rashod Bateman joined Andrews in being limited or seeing themselves forced from the game altogether. That’s impressive work from Mr. Jackson.