The Cleveland Browns and quarterback Baker Mayfield want to find a trade partner this offseason, ending a relationship that soured weeks ago. Unfortunately for both sides, it seems a deal might not be in the cards right now and they might be stuck for some time.

Mayfield requested a trade after Cleveland met with Deshaun Watson, a demand that was denied. However, everything changed when Watson changed his mind and approved a trade to the Browns. Ever since, the desire to get Mayfield out of Cleveland became more mutual.

Browns general manager Andrew Berry shopped the former No. 1 pick around the league. Unfortunately for the franchise, other clubs seemingly weren’t interested in acquiring the former Heisman Trophy winner.

It seemed odd at a time when the Carolina Panthers best quarterback as of now is Sam Darnold and the Seattle Seahawks are tying their hopes to Drew Lock. We now have further clarity about why teams aren’t interested in acquiring Mayfield right now.

According to Ian Rapoport of NFL Network, NFL teams are interested in Mayfield but not at his 2022 salary ($18.8 million), which is fully guaranteed and counts entirely against the NFL salary cap.

While it’s a cap figure both the Seahawks and Panthers can afford to pay, the salary far outweighs any level of confidence another franchise would have in Mayfield as the team’s starting quarterback. 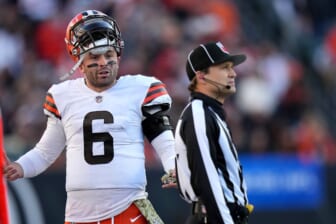 It puts Cleveland in a difficult spot. The franchise wants to trade Mayfield so it can use the created cap flexibility to further strengthen its roster. However, Rapoport notes that there is at least a possibility Cleveland keeps Mayfield around for now.

It’s very possible this idea is being pushed by the Browns to try and create leverage. Mayfield wants out of Cleveland, but that might only happen if he agrees to a restructured contract.

Given the franchise signed Jacoby Brissett and Mayfield was willing to sit out in 2022 without a trade, Cleveland simply doesn’t have much leverage here. If Mayfield’s salary is preventing a trade and the Browns won’t cover it, we might not see a trade for some time.