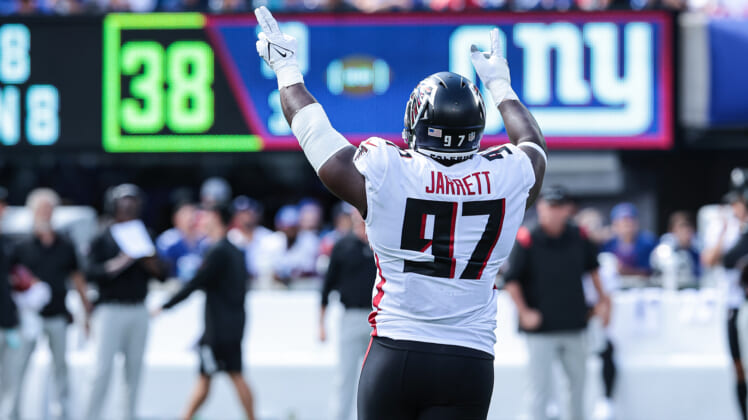 Players like Grady Jarrett don’t become available every day, or even every offseason. Sure, the recent player movement within the NFL has been a bit more hectic, with several stars changing teams, but that isn’t the norm. We’ve seen everything from top quarterbacks, elite receivers and stud pass-rushers change teams, but the offseason is far from over.

As franchises continue filling needs as we approach the draft, there are certain to be a few coaches who feel they still need some help getting after the quarterback.

Grady Jarrett could become next Pro Bowl player to be traded

One player who could become a popular name in NFL trade rumors, is Grady Jarrett, who’s heading into the final year of his contract. With a large cap number, the Falcons may be more inclined to trade their star defensive tackle instead of signing him to a new extension that brings his 2022 cost down.

For Jarrett, he may prefer a trade away from the Falcons, who some might suggest currently has one of the most talent-deprived roster in football. This would present the Falcons a chance to reset, bringing in more draft picks that better aligns with their competitive timeline. Based off these recent comments by coach Arthur Smith, a trade could happen.

“He knows where we stand. We love Grady. We also know that players may have their own opinions, and that’s welcome. It’s part of doing business. We’ll see how it plays out. I love Grady and we’d love to keep coaching him.”

Knowing that players have their own opinions? Like opinions about their value to the team? Or feelings of wanting to get back to a playoff team? Who knows, but those comments sound a bit cryptic.

Then, there’s the fact that Jarrett didn’t show up to the first day of the Falcons’ offseason program, further indicating there could be an upcoming roster move that sends the disruptive defender out of town.

Heading into his eighth season in the league, at 28 years old, Jarrett has developed into an interior pass-rushing menace. His most effective seasons from a production standpoint came during the 2018-19 campaigns, when Jarrett compiled 13.5 sacks, which coming from a defensive tackle is quite good.

At 6-foot, 305 pounds, Jarrett isn’t a nose tackle in a 3-4 scheme, he’s much more suited to play defensive end in such a defensive front, but in a 4-3 defense, Jarrett can continue playing DT.

Having already played in both schemes during his career, Jarrett comes with experience wherever you plug him in. At least a few franchises would leap at the opportunity to acquire the two-time Pro Bowl defender this offseason, should he become available.

Here are three of the most ideal Grady Jarrett trade landing spots during the 2022 NFL offseason.

Dallas Cowboys land a star by trading for Grady Jarrett

In this case, the picture says it all. For the Dallas Cowboys, trading for Grady Jarrett means reuniting the talented defensive tackle with his former head coach, and now-defensive coordinator in Texas. Under Dan Quinn’s guidance, Jarrett made it to the Pro Bowl twice and would likely enjoy the opportunity to play his role within Quinn’s defense once again.

While Jarrett’s numbers were down a bit last season, he was still effective, measuring with the fifth-best pass-rush win rate among DTs according to ESPN. His play hasn’t suddenly dropped off and if there’s anyone who can get the best out of him going forward, it’s the coach he’s played six of his seven NFL seasons with.

One thing the Tyreek Hill trade opened up was a lot of cap space for the Kansas City Chiefs. There’s no indication they wish to turn that into a Grady Jarrett contract extension, but why not use some of it in an effort to reinforce the defensive line? In an AFC West division featuring quarterbacks such as Russell Wilson, Justin Herbert and Derek Carr, the Chiefs will need all the help they can get in 2022.

The Chiefs have plenty of newfound draft capital as well, why not see how much the Falcons are looking for in any potential Jarrett trade? In an ideal world, the Chiefs would probably prefer to acquire an edge rusher that complements Chris Jones on the outside, but pressure is pressure. While the Chiefs were among the league leaders in pressure rate, they didn’t do a good enough job turning the chaos into sacks a year ago. Trading for Jarrett could help solve that, without spending premium draft capital.

If Grady Jarrett wants to remain part of a bird’s nest, he could perhaps join the Arizona Cardinals instead. With Chandler Jones packing his bags for the Vegas strip, the Cards will need to find new ways to wreck the opponent’s game plan. Sure, they still have Markus Golden and J.J. Watt, but that tandem isn’t scaring anyone. Add another interior presence such as Grady Jarrett, and now you have a trio causing havoc.

For the Cardinals landing Jarrett would be their biggest move yet this offseason. He may not come with the same fanfare as Watt did a season ago, but Jarrett could arguably be more effective in his first season with the Cardinals. Perhaps the biggest hurdle for the front office to clear, is finding out how to fit Jarrett under the salary cap, while keeping an open mind about a future contract extension for Kyler Murray that keeps him in the desert. Either way, it’s probably worth looking into for general manager Steve Keim.

Related: How the Atlanta Falcons became the latest NFL example of awful mismanagement